iOS ports of games from other platforms are really hitting their stride. But Radiangames has very quickly become one of the top name developers in the dual stick shmup genre within the iOS scene. Porting over Fireball, Ballistic, Super Crossfire and Inferno from the XBOX Live Arcade, they’ve gained an even larger fan-base, and shown that an addiction to spheres can actually be quite healthy. But their most recent title, Slydris, is something totally different. And it’s great being able to see another side of the Radiangames team. 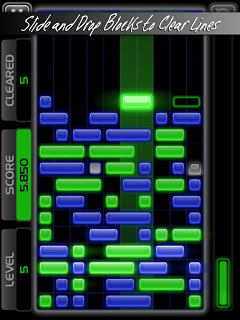 Slydris, originally released for the PC and MAC earlier this year, is a unique block-based puzzler that will have you just as hooked as their awesome DS Arcade shooters. Like Radiangames other titles, Slydris has multiple play modes; Infinite, Zen, and Survival, each offering up varied gameplay. However, the goal is always the same; Keep clearing lines by lining up and moving pieces.
Now, in Infinite Mode, you’re only able to move one piece at a time, which really puts the emphases on what piece you do decide to move. With blocks falling down from the top of the screen after every turn, as well as pieces moving up from the bottom every time you clear 5 lines after you clear 30, this emphases on which piece you move becomes even greater, because once a block is unable to fall from the top, it’s game over. The same rules apply to Zen Mode, you can move one piece at a time, except you don’t need to worry about making room for blocks. There’s no game over in this mode, and it’s more of either a ‘get comfortable with the gameplay’ or an ‘I just want to play with no added pressure’ mode. 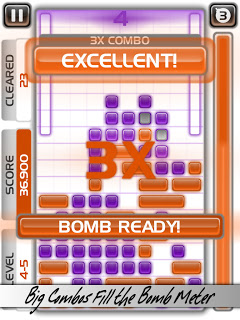 In Survival Mode, it get a little trickier. You’re given a certain number of random lines while you’re unable to move any blocks. Once the lines are set, you’ll have about 5 seconds to move as many pieces as you can while trying to get rid of those lines. It quickly becomes pretty frantic , and is easily my favorite mode of play.
In each mode, there is a gauge on the right side of the screen which, when filled, gives you a bomb which you’re able to use to clear any 3 lines with. This really comes in handy, especially in the later levels when you’re looking at a game ending situation. Like in Tetris, every 10 lines you clear is counted as a level, and once you reach that level. Once you reach a level, you’re able to start every game from then on at that level, which, like Radiangames previous titles, eliminates a lot of the starting game boredom after you’ve gotten really comfortable with the game. Also similar to Tetris is the combo scoring system. As you complete lines, more blocks will be able to fall down into the nooks and crannies of your wall which has the potential to wind up knocking out more lines. The more lines you clear, the bigger your multiplier will wind up being, and the bigger the score. 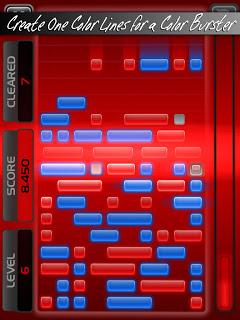 Learning how to line up blocks so that they fall down, clearing more blocks is essential if you want to compete on the GameCenter leaderboards. And with boards for both Infinite and Survival Modes, as well as 16 achievements, there’s plenty of added replay value if you do decide to go score-chasing. Seeing this other side of Radiangames has given me a newfound appreciation for their titles. With as addictive, hectic and fun as their shooters are, Radiangames has captures that type of frantic feeling and injected it perfectly into this unique, and incredibly entertaining block-sliding puzzler. For $1.99, it’s a must have for puzzle fans, as well as anyone else who’s interested in seeing that Radiangames developers aren’t all orbs and spheres. I really hope to see them branch out like this more often with future releases.