After the release of Metal Slug 3 by SNK and Dot Emu, a lot of gamers have been hoping for more ports of classic SNK titles. However, I don’t think anyone really expected to see another title so soon. This time around, SNK and Dot Emu have brought the fantastic old-school SHMUP, Blazing Star, to the iOS, and it’s just as faithful a port as Metal Slug 3. 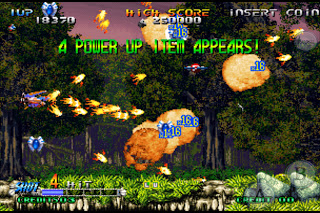 For those of you who have never played the original Blazing Star, it was originally released in Arcades back in 1998, and is the sequel to the other fantastic Arcade shoot-em-up, Pulstar. Blazing Star includes 6 different pilots + ships, all having their own type of shot, and special shots, offering up quite a bit of varied gameplay. The ships with the stronger shot types tend to move slightly slower than the ships with the weaker shots, leaving it up to the player to find the ship which best suits their style of play. 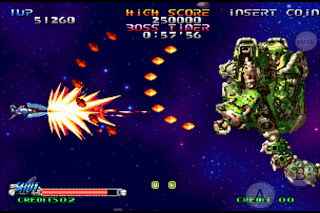 Included in the game are 7 stages, each getting progressively more difficult as you progress. Luckily, just like in Metal Slug 3, you’re given continues, and can also choose to play in Mission Mode, which lets you play from the last level you reached in Arcade Mode, so that you’re able to experience playing all of the 7 stages, as well as practice certain stages after you get use to the gameplay and start to go for high-scores. Also included in the game, same as Metal Slug, is the option to switch from pixilated to smooth graphics, add scan-lines, and choose to play in 4:3 or 16:9 ratio. Also available is the ability to play in 2 player co-op mode via Bluetooth, which, like with Metal Slug, is a fantastic addition. 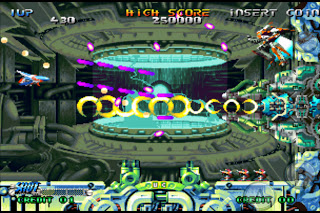 There are two control schemes, one includes a joystick, and the other offers up 1:1 relative touch controls. You’re able to move the two shot buttons as well as the joystick to anywhere on the screen you like, which is a huge plus, especially when playing on the iPad.
Unfortunately, a lot of players are having problems getting use to the ship speed. The way the game was made, making stronger ships move slower, this means that the ships will not move as fast as you can move your finger across the screen, and because of this, a lot of players have had problems getting comfortable with the gameplay. Also an issue is the joystick. The dead zone that you’re able to touch is fairly small, and results in the ship’s movement being pretty jerky, and hard to control. Another issue some have been having is that in order to fire, you need to constantly tap on the shoot button. Fortunately, SNK and Dot Emu have stated that they are adding an option for ship movement to be sped up, as well as an auto-fire option. But not to worry, for those of you who have come to love the game in the past, and are accustomed to the ship’s movement, and the firing mechanics, the new control set-ups will have a separate leaderboard, leaving the hardcore players boards safe and sound. 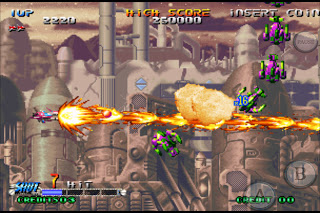 Graphically, Blazing Star looks amazing. The animations and 2.5D graphics look incredible on both the iPhone and the iPad, and the music is exactly as it was over 14 years ago; hard-edged, and full of energy. The GameCenter integration definitely adds to the already high replay value that almost all SHMUPs inevitably include, having boards for all 4 difficulty settings, as well as 15 hard to snag achievements.
Being Universal, and priced insanely low at $2.99, Blazing Star is a game that all SHMUP fans need to check out. With it’s slick graphics, awesome gameplay, and fantastic scoring system, it sits along-side the other heavy hitters like Dariusburst and RayStorm, as one of the best non-Cave shoot-em-ups available for the iOS. Hopefully SNK and Dot Emu will keep porting over amazing classics from the past and making them available via the AppStore (here’s hoping for The Last Blade!). Having them available at any time and in our pockets is simply amazing.