PNJ has come out with quite a few really decent games over the last couple years. The first game I managed to grab from their studio was Terra – Eternal Chaos, an action RPG. Since then, Real Fishing 3D, Zombie Run, Block Knight! and plenty more have all graced my iDevice. But their latest title, Slash or Die, definitely has that spark that makes it stand out. And even though it’s pretty grindy, and has IAP with expensive items, it’s still a game that I’m enjoying quite a bit. 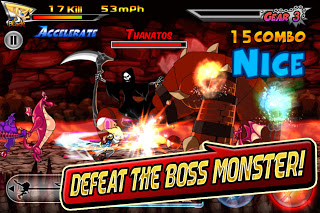 Slash or Die has you controlling Blade, a super powered being who’s the only hope for Earth once Machines, Aliens, Ghosts and Demons start invading. There is only one gameplay mode, but you’re given an option for Hardcore Mode once you complete the game, which definitely does add to the replay value as well as the difficulty, and with 24 challenging missions, there’s enough content to keep you busy for a while. 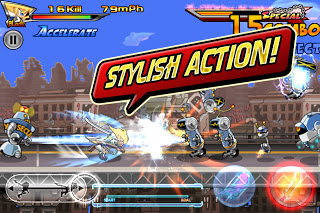 Controls are simple; a left/right slider bar and jump + attack buttons. Your character basically stays in one spot on the screen the whole game, and the slider bar controls which way he’s facing, as well as how fast he goes. Forward increases your speed gradually over time, while facing backwards slows him down. As you make your way through each level, enemies will come at you from both sides, and you’ll often be faced with the decision to either attack an enemy in front of you, but risk a bad attack, causing the enemy to fly backwards instead of die, or maybe even miss the enemy, in order to be able to turn around and hit an enemy coming at you from behind, or turn around, and make sure you get the enemy behind you, and risk not being able to turn back around quick enough to hit the enemy in front of you. Mob control winds up being a core aspect of the gameplay. 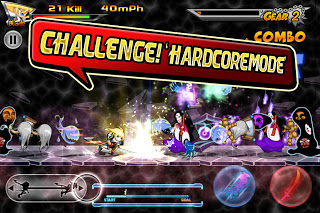 The graphics are top notch, looking fantastic on retina display, and the 4 environments that you’ll guide Blade through each have their own look, as well as enemies and objects. The character design is a huge plus in Slash or Die!, with 4 different enemy races, and a total of 22 separate enemies, each having their own unique way of moving and attacking. There are also various objects which Blade will need to either dodge by jumping, or slash through as he’s running through each of the levels. These various objects generally come at him quicker than the enemies, so keeping an eye out for them is a big priority. If you don’t, chances are these are what will cause most deaths. The animations are also very well done, with the running, attacking, and jumping as well as the explosions and each of the enemies attack animations all look fantastic, and definitely add to the look and the feel of the game. 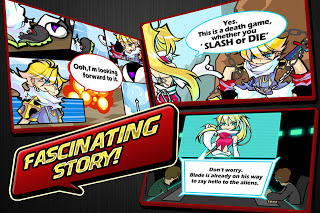 With Slash or Die! priced at $0.99, and being Universal, it’s a great title for fans of runners and hack-n-slash games. With GameCenter support including 2 separate boards, one for your Stylish Points, and another for your Max Combo, along with 25 achievements to try and grab driving the replay value alongside Hardcore Mode. Slash or Die! is easily my favorite PNJ title next to Terra – Eternal Chaos, and if this is any indication of the direction PNJ is going in in the future, it’s definitely looking bright.