The puzzle genre seems to be one of the most expansive genres of video games right now, reaching out and being merged with other genres and unique ideas week after week. Back in February, newcomer Fluttermind’s first iOS title, Incoboto, hit the AppStore, and gamers were exposed to one of the most unique, atmospheric and incredibly immersive action puzzlers to ever be released. And a couple of days ago, it was updated to include iPad 3 retina support, making it one of the most graphically stunning games available for the iOS. 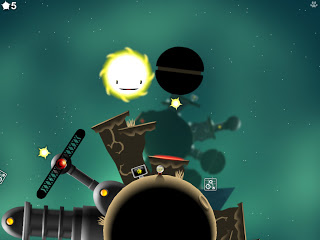 Incoboto is the story of a little boy named Inco, living in a dying Universe, who awakes to find everyone he’s known dead and gone. Luckily, he’s not completely alone. That day, a sun named Helios approached Inco, saying he was hungry. Tired of staring off into space, watching the Universe die, they set off on their journey. Clues are left everywhere pushing him in the direction of The Corporation. The company who’s built, produced and basically rules everything, everywhere. 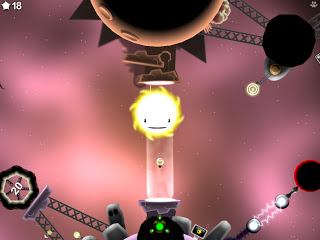 Movement is simple; touching on either side of the screen moves Inco in that direction, and tapping on the screen or swiping upwards causes Inco to jump. You’re also able to choose a joypad control scheme which gives you left/right buttons. Still, a tap or swipe upwards is required to jump. When you run into an object that can be fiddled with, read or picked up, a finger will appear above it, and to interact with it, you just need to tap under the finger. In order to drop an object, you tap Inco, to throw an object, you need to draw a line from Inco in the direction you want to throw, and to scan objects, you press two fingers down on both sides of the object. 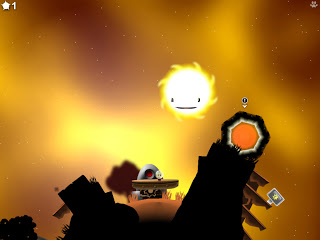 Each level contains a certain amount of Starpieces, which you need to figure out how to collect so that you can feed them to Helios. Once you do, he will have enough power to open up the next Stargate so that you can progress to the next level. There are also 50 Star Charts lying around throughout the game, which you don’t need to collect, but collecting them all will get you a bonus at the end of the game.
Each world you come across will become progressively more difficult, with more and more objects, hazards, and gameplay mechanics being introduced almost every time you move forward. These include gravity beams, rotating planets, movable platforms, objects which require energy balls in order to run and loads more. The level design, and where all of the interactive objects are placed are fantastic, and very well thought out.
Graphically, the game is incredibly atmospheric, and combined with all of the clues and other text included in the game, creates a very gloomy and bittersweet environment. The lo-fi ambient music and sounds also help lend a hand to the game’s feeling, and perfectly complete the immersion provided by the gameplay. 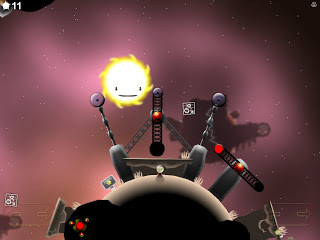 With Incoboto priced at $3.99, it’s a steal, as it’s one of the must have titles available for the iPad. GameCenter is supported, and includes 12 achievements, but once you complete the game, there’s not much replay value there. However, the 6 or so hours it’ll take you to complete the game is 6 hours you won’t soon forget. Fluttermind has created an iOS classic with Incoboto, and if you’re even remotely interested in puzzle, adventure, or darker video games, this is one that you need to check out, and we, here at The App Shack, are eagerly awaiting to hear what Fluttermind will bring to the platform next.