So, you’re the best thief in the world. You’ve stolen enough goodies to keep you and your friends living like kings for more than a couple lifetimes. In fact, you’ve stolen so much, that the thrill is gone. Boredom sets in.
Thankfully, you have a close friend who happens to be a genius scientist named Doc, and he’s just discovered that there’s a top secret alien artifact, known as G.R.A.I.L., housed in Area 51. This artifact could change the course of history. Your heart starts to speed up, and you feel that thrill once again. It’s time to push yourself to your limits, and see if you’ve really got what it takes to steal the most prized possession on the planet. 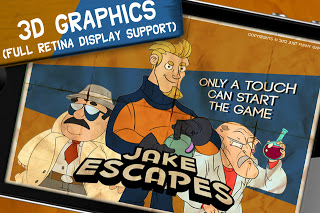 Just Funny Games (developers of the unique puzzler, Trigonon) most recent addition to the AppStore, Jake Escapes, puts you through 17 Story Mode stages, as you try and steal the alien artifact, discover its secrets, and make your way around the world. There is also an Arcade Mode with the same 17 stages. There’s no differences between the modes that I can tell. Each of the levels have the same objectives, and same enemy layouts, which is awfully strange.
The controls in Jake Escapes might take a little getting use to, but once you do, you’ll be able to maneuver around the face of buildings with ease. To climb up, you’ll need to swipe down, and to move left you need to swipe right and right needs a left swipe. You’re also able to move diagonally up left and up right by swiping in the opposite direction there as well. In each of the levels, there’s different enemies which you’ll either need to avoid completely, or tap on to shoot with a laser from Doc’s flying ship. Some levels will require you to shoot the enemies so that they drop certain objects, while others will just have you searching the building for an object out in the open.
All the while, you’ve got a detective chasing you, adding some extra stress, and making you come to quick decisions on where to climb. Also adding some difficulty, there are some windowsills which are boarded up, and unable to grab. This means you’ll need to weave a path through enemies and the boarded up windows while running from the detective, and looking for the object in order to complete the level. 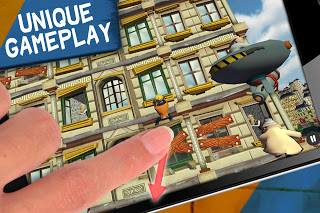 Graphics-wise, the game looks great. Each of the character models are well designed, and the buildings have plenty of detail. Accompanying the nice graphics are great animations, both for Jake’s climbing, as well as the characters you’ll encounter within the buildings throughout the game. Guys tossing mannequins, artists painting, mimes and drunkin weirdos walking out on the ledges, kids throwing toys at you, and even bears ready to grab at you are all smoothly animated. The music and sound effects also go along perfectly with the graphic look and feel of the game. 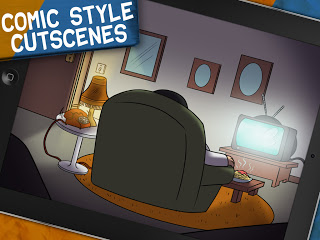 A pretty big downfall for Jake Escapes is the lack of GameCenter or any other online leaderboard or achievement system. Even though they are coming in a future update, it’s always strange when a development company doesn’t include GameCenter in an action arcade game like this in the very beginning. Until the update goes through, there’s very little in terms of replayability. Also taking away from the replay value is the lack of any sort of scoring system. There’s no clock to see how quickly you complete a level, no score for taking out a kid who’s chucking toys at you, no special bonuses for multiple combos or big scores for beating the end of the game boss. It really seems pretty bare bones if you’re a huge fan of high score chasing or achievement collecting. And a nice scoring system would add immensely to the replay value, as well as general enjoyment for a game that’s set up like Jake Escapes. There’s also the no real noticeable difference between Story and Arcade Modes, giving even less drive to play through Arcade Mode once you unlock all of the levels by playing through Story Mode. 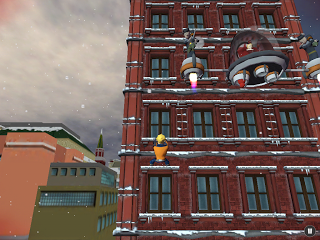 Hopefully more features can be added to Jake Escapes in the near future. Aside from the lack of all that I’ve mentioned, it really is a nice flowing, highly entertaining game with fantastic cut-scenes, a nice story, and great gameplay. Being Universal and priced at $1.99, it’s definitely worth picking up, but only if you’re willing to wait for some real replay value in a future update. The developers are closely working with players on the Touch Arcade forums, asking what features they’d like, what kind of achievements they prefer, and more, so hopefully, Jake Escapes will become a nice rounded out game when everything is said and done. But right now, it’s a little barebones to really stand out among some of the better action arcade games available for the iDevice.