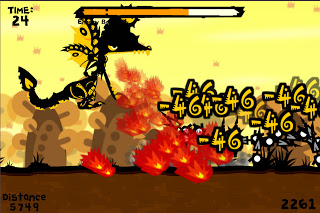 You’re given 9 years to battle it out with tribal men who are stealing your eggs for food. Each year you get to choose an evolution for your dragon, each having a different effect cosmetically, as well as with your dragon’s stats.
Starting off, your dragon will be fairly week, barely able to make it through one world in one year. But as you progress, adding different evolutionary powers, like fire, water, acid, claws, wings and more, you’ll be able to make it further and further across the land throughout each year. 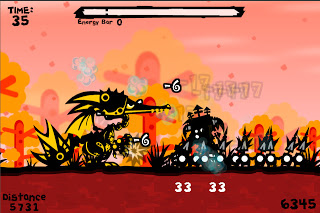 Basically, Dragon Evolution is a score chasing arcade game with strategy/RPG elements thrown in for good measure. As you take out the tribes men with your basic attacks, which your dinosaur does automatically, and special attacks, which you control by tapping on either the left or right sides of the screen, you earn points. There are also traps and big towers which you’ll need to fly over and avoid. This is done by holding down on both sides of the screen.
As you use special attacks, fly, or are injured while going through each world, your energy bar decreases. Once you run out of energy, you’ll fall over and need to tap quickly on the screen to recover and keep battling it out. You do have a time limit of 60 seconds in the first world, but if you make it through a world, more time is added to your clock, 40 seconds for the first world, 35 for the second, 30 for the third, and so on. Also, your energy bar is completely filled up and you earn 100 points each time you complete a world. 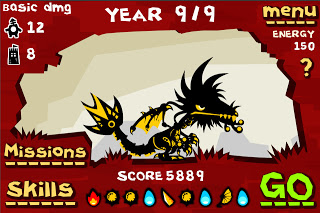 Adding to the drive of the game are objectives, which you must complete in order to build up your overall multiplier. The whole point being to get the best score you can by combining all 9 of your years scores together and evolving the best dragon you can.
Each evolution gives different stats which effect how powerful your attacks are and how much energy you have. Fire, for instance, adds 3 attack points to your tribal man attacking power, but no points to your building attacking power, and no points to your energy, while the Claw Evolution adds 1 point to your tribal man attack, 1 to your building attack, and 10 energy points. It is also interesting seeing the effect the evolutions have on the cosmetic look of your dragon, with Claw, of course, changing the look of your dragons hands, while fire adds a big addition to your dragons head, water gives him hair on his head and acid adds spikes to his snout. However, each time you add another evolution, it has the possibility of completely changing the appearance. 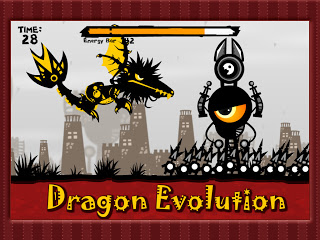 All-n-all, with Dragon Evolution being priced at $1.99, having Universal and GameCenter support including leader boards for each year, as well as a total score board (no achievements are included in the GameCenter support), it’s not a bad purchase by any means. There is enough drive to keep players going and if you’re a high-score chaser, it’s easy to become wrapped up in completing achievements to increase your multiplier. Another mode, something like survival where you pick out 5 evolutions right off the bat, and get as far as you can before you run out of energy, or have a set time-limit to get the best score you can would have been a great addition, but this, currently, one man project, definitely shows the talent learned from working on previous games over the last 5 years. Dragon Evolution has hooked me for the time being, and I’ll be sure to keep an eye out for more Nob Studio releases in the future. There’s definitely some unique and creative thinking behind this bundle of fantastic graphics, action filled gameplay and drive for a high-score.