It’s not too often a simplistic game completely blows my expectations of it out of the water. But Bee Leader, the new game from Flightless Limited, has done just that. I never would have thought that a game that revolved around controlling a bee and collecting nectar would have hit almost every single addictive cell in my video game obsessed brain, but with Bee Leader’s gameplay and insanely good all around package have changed my views of video games that, on the outside, look boring, and like they’re made almost entirely for prepubescent children. 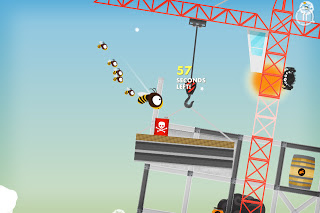 Throughout the game, you will basically be doing one simple task. Exploring each of the levels, looking for nectar, smaller bees to join you, and clocks which add more time to your day. You have from sun up to sun down to collect as much nectar as you can and take it back to your hive. There are, of course, hazards and enemies which you’ll need to avoid as you fly throughout the stages. Clouds with lightning and rain, trains that spew up steam, windmills and rocks which can trap you, birds, snakes, skull throwing eagles, and the dreaded hornets are only some of the hazards and enemies you’ll need to navigate around while looking for nectar. If you’re hit by a projectile, or by a hazard, you’ll wind up loosing quite a bit of your already collected nectar, and god-forbid you run into a hornet. They’ll wind up chasing you down and corning you, taking all of your nectar if you let them. 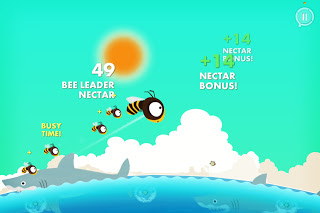 Bee Leader stands out in almost every single aspect. The graphics are cartoony, but very polished, the music and effects are outstanding, control-wise, you’re able to choose between a freemoving joystick which appears whenever you touch the screen, a set joystick on either the left or right hand sides of your device, touch anywhere and drag, tilting controls, and an option to use another device as the controller with the Joypad app. The physics and inertia of every moveable object is great, animations are smooth and level designs are top notch. But what I really love about the game is the scoring mechanics. Every smaller bee which you collect joins you, and adds to the amount of nectar you receive from the nectar balls as well as flowers, so the more smaller bees you have following behind you, the more nectar you’ll be able to haul away. The flowers have a ‘sucking streak’ which adds to the amount of nectar you collect so long as you don’t leave the flower. Because flowers also stick to you for a short amount of time, you can extend this sucking streak by jumping from flower to flower without stopping the collection of nectar, which allows for some nice bonus points. There’s also a honey bonus when you drop off nectar at your hive depending on how much nectar you’re dropping off. All of this, combined with the subtraction of nectar based on what you come into contact with throughout the stage makes the scoring system in Bee Leader fantastic. 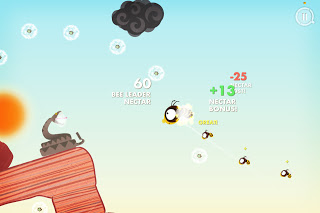 Adding to the great scoring is GameCenter support. For each of the 12 levels, there’s a separate GC Leaderboard, as well as a total score board for when you complete the game. There are also 10 achievements, but these don’t really add much replay value, as they’re all centered around the ranks you get in the game by filling up your hives with honey. However, there are plenty of stats which help round it all out by being able to post these stats on social networks including Facebook, Twitter, Tumblr and through e-mail. 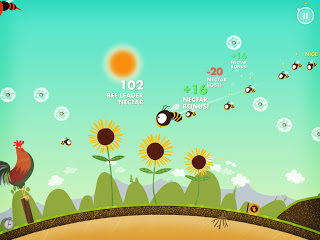 Bee Leader is priced at $0.99, and the developers have stated that more levels are coming in future updates, which is great, because after playing and replaying levels trying to get the best scores you can, you’re only going to want more. The game is Universal for those of you who have iPads, or both and iPhone/iPod and iPad, which is always great to hear.
So, final verdict? I can’t believe a game that revolves around making a bee fly around a level to collect nectar before the sun goes down is this fun. Incredibly fun. Right now I’m still stuck in the first two worlds (6 levels) trying to best my score and move up the GameCenter leaderboards, playing and re-playing levels over and over again. The only bad thing I can say is that the game might be a tad too short. With only 12 levels, if you aren’t interested in besting your score for the leader boards, chances are you’ll complete the game fairly quickly. For a dollar, it’s a fantastic buy, and will definitely wind up being one of my favorite casual high-scoring arcade games of the year.