FLICK ROCKET
Binary Square
Retro arcade games have always remained fairly popular with old-school gamers throughout the years. But since the AppStore launched, it seems like they’re making a pretty big come-back. Most likely it’s because of the cheap prices iOS games have, but it’s also because there’s a lot of 20 and 30 year olds who are getting back into gaming because they can now fit in time to play games by having a phone/portable device that’s able to always be with them. Binary Square is definitely a development group that’s taking advantage of this, and giving iOS gamers high quality old-school-like arcade games. Flick Rocket fits right into that category. 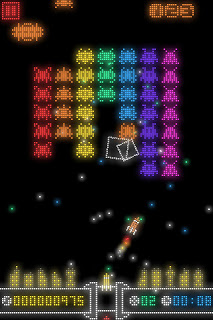 The goal in Flick Rocket is to protect your city from the onslaught of aliens by flicking your rockets up at their ships and projectiles. Once they blow up all of the buildings in the city you’re defending, it’s game over. Sounds simple enough, eh? And it is, really just that simple, and it’s in this simplicity that the game shines. It‘s addictive old-school arcade gameplay that’s easy to understand, and takes a while to really master. Knowing where and when exactly to send your rockets will take practice, but once you finally get it, it just clicks, and feels great.
There’s also some great power-ups which really help out once you get to know what does what. There’s a shield which protects your buildings, a time-stopper, which freezes everything on the screen, extra buildings, and rockets that bounce off the edges of the screen. Along with this, some enemy ships also drop letters. If you collect them all, spelling out EXTRA, you’ll be able to play through a bonus stage.
Now, all of this is great, and fits right in with the old-school type of arcade gameplay. But the simplicity could also turn some people off. You do swipe, and a lot, over and over again, and with gamers being flooded with fully immersive deepthy games, there are some people who are sure to get bored with it fairly quickly. 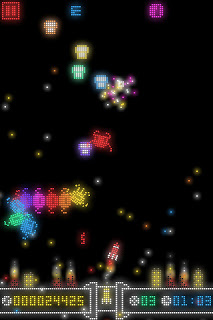 There’s two modes in Flick Rocket, Arcade and Campaign. Right now, there’s only 3 different cities that you can try and defend, with 7 more ‘in development’. In Campaign Mode, you’re able to pick which city you’d like to defend, and play through wave after wave until all 10 buildings are destroyed. Each city has it’s own type of enemy. With Tokyo, you’re put up against Space Invaders type enemies, with line after line needing to be destroyed. Paris has you go up against a centipede type enemy, which breaks in half, and turns into more enemies every time you hit it with a rocket, and LA has you destroying asteroids before they hit your buildings, with each asteroid breaking into smaller asteroids. In Arcade Mode you’ll go from town to town, destroying all the enemies you can, and keeping as many buildings protected as you can, until all your buildings are gone, feeling pretty much like a survival mode. 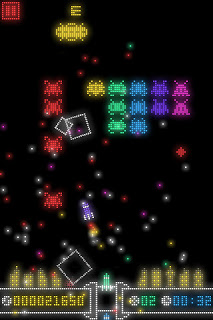 It’s supported by GameCenter, having leaderboards for all 3 Campaign cities, and another for Arcade Mode, but there are no achievements. If you’re looking for something with lots of depth, or are sick of games that have a bunch of ‘coming soon’ levels, or just plain don’t like old-school arcade gameplay, you’d be better off skipping this one. But with Flick Rockets being Universal, priced at $0.99, having a pretty nice scoring system with great power-ups, offering a lot of challenge, and replay value with GC leaderboards, it’s a fantastic retro title that’ll give you the same feelings you use to have while going down to the arcade or bowling ally back in the 80’s or early 90’s, wasting time away quarter after quarter.