On The Wind Looks Beautiful

Have you ever wanted to be the wind? In a few weeks you’ll get your chance with Dont Step On The Cracks’ ‘On The Wind’. From what we know, On The Wind will be a sort of survival runner where your goal is to try to keep a group of leaves drifting in the air. The game will be sporting some awesome, crisp and stylish artwork with calm ‘windy’ music to go with it. Apart from the fantastic visual appeal, the gameplay in On The Wind will be driven by the struggle to “survive” through each season. Leaves will be plentiful in the spring, but in the winter it will be difficult to get by. In terms of controls, it will be a simple, one-touch and drag to direct the wind.
On The Wind is looking really good so far. Randomly generated worlds should keep the game fresh each time you play, and GameCenter integration means loads of achievements and competitive leaderboards. Be looking for On The Wind in the next few weeks. Until then, check out the complete feature list along with the trailer and a handful of screenshots on Don’t Step On The Cracks’ official website.

On The Wind Features:
– Full retina graphics for the new iPad
– Simple and intuitive ‘one touch’ controls
– Relaxing play with the soothing sound of the wind, or challenge yourself to beat your friends
– Beautiful world that’s generated as you play so it’s different every time
– Game Center enabled with lots of tricky achievements, and leader boards to challenge your friends
– Universal app, buy once and play on your iPhone, iPod and iPad. 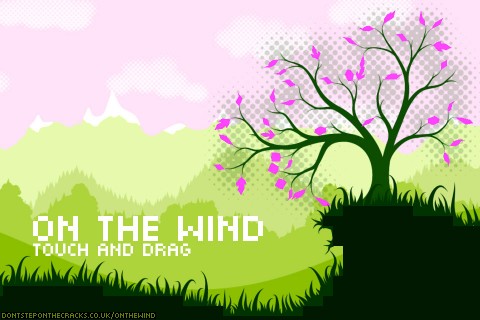