‘Niko’ is a unique platformer published by the Sulake Corporation, also known as the makers of Habbo Hotel, which is integrated into the game with badges and medals. ‘Niko’ is released with six free levels, with a 1.99 purchase for the full game, which contains over 30 levels in total. In it, you take control of Niko, a lovable little character, in his quest to rescue his friends from the Otherworld. Along the way he can also release the mysterious Sun Sprites, who have been trapped in the Otherworld along with his friends. 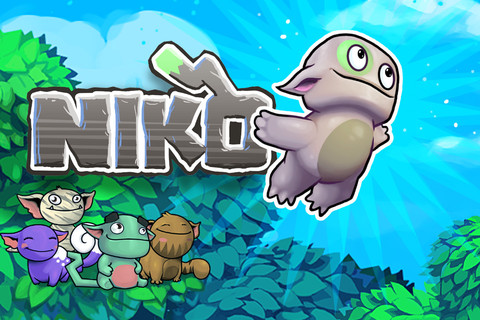 What makes or breaks a platformer is how good its controls are. Often times when a developer experiments with new control types it ends up reflecting poorly on the game. Luckily for the player, the controls work great. There are two options in the controls. One utilizes tilt to move left and right with two buttons to drag to jump. The other one, my personal favorite, is left and right arrow buttons on the left side of the screen with a draggable button on the right. To jump in the game, you simply drag the button down for power and sideways to jump directionally. A dotted line indicator allows for precision jumping as well. Another nice touch is the ability to drag off the character to jump as well. The drag-to-jump mechanic works surprisingly well, and combines perfectly with the game’s ingenious level design. 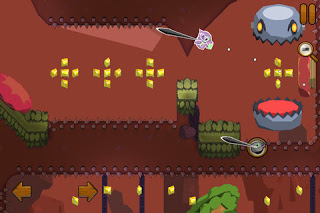 The graphics of ‘Niko’ look very good, with a pseudo-3D effect on the otherwise 2D graphics. The animations are also great, particularly the jumping animation, which has you spinning like a ball through the air. At times I almost wish it allowed you to do this when running as well, but I think that would make it look too much like Sonic. Some of the art may take a little time to grow on you, but it does look nice, particularly the Niko character on the menu screens. 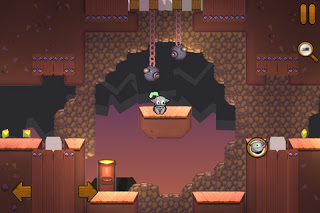 Content: 4/5
Though the game does have decently large levels, it does feel a tad bit low on content. With 30 levels, you might go past them a little quick. However, with a 3 star rating to attain each level and 3 switches to find, it does make up for itself. Game Center achievements and leaderboards are also available, along with Open Feint, allowing you to compete against people around the world. Overall there’s a decent amount of content here, but I think a little bit more would make it better.

‘Niko’ combines several game elements to make an enjoyable game experience for even someone who isn’t a fan of platformers. There’s no risk in just trying it out either: Niko comes in a free to play model, with six levels completely free before a $1.99 purchase for the full game. Sulake and Fabrication Games team up to bring us an inventive and enjoyable platformer.
‘Niko’ on iTunes
**Review reposted due to site glitch**
Posted in: 4.5 Stars, Free-to-play, Peter Toms, Platformer, Universal