In a world of crime, genocide, and developers that integrate in app purchases there is little room to relax.  Even our gaming experiences are stressful like Gears of War 3 or RAGE. Idyllic by Fatcow Games fills that hole with relaxing tilt-based gameplay that is easy on the eye and aesthetically pleasing to boot.
First things first, this is by no means a vertical jumper like DoodleJump and its millions of clones. You jump horizontal in Idyllic which can be a bit trickier as more precision is needed but is a welcome change.  Similar to its predecessors the gameplay is in fact infinite so you are getting your moneys worth by investing 1.99 in it.  But where it differs is in the character upgrades, upgradeable powers, mini bosses and coin collecting. 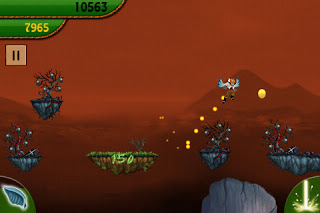 When you first start off the gameplay is a little slow and it takes awhile to get to where you feel comfortably challenged by the gameplay. In fact, most of my main deaths occurred early in the game because I tend to over tilt.  The reason why I say early in the game is because there are checkpoints in the shape of houses placed randomly along the course of the game. The game saves your progress there and whenever you die or accidentally lose battery power you always restart at that particular part.  That means no drudging through the same platforms over and over again to get back to the point you were before. I haven’t got far enough to really test the infinite gameplay aspect of the game but rather than spending all of my life playing Idyllic I’m going to take the developers word on this one.  After you bounce on a platform it changes from evil to good. Apparently you are on a quest after you find your world in pain to restore your planet to the way it used to be.  Later in the game it of course speeds up and gets harder to be sure you’ll land your jumps successfully. 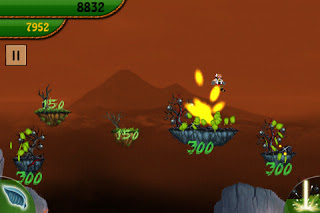 At each checkpoint you can buy upgrades with the coins you find randomly strewn about the level.  These upgrades vary between increasing the value of your coins and allowing you to double jump in the game.  This adds a extra element of replayability to the game as you will have a extra objective rather than just jumping around aimlessly.  Your two basic abilities are power smash and flap.  With Power Smash you can come crashing down on a platform or enemy to procure coins reminiscent of Mario.  Flap allows you to grow wings and float over to a platform in case you misjump.  These abilities recharge over time and one of the upgrades is in fact to reduce the time it takes to recharge.

The music is fantastic and has a deep relaxing melodic feel to it that draws you into the game.  The graphics are good particularly the backgrounds which feel like they had a lot of work put into them. Overall this is a great casual endless jumping game that really drew me in and had me playing for quite some time.  If you have some spare change on your account there is no better place to spend it than on Idyllic. I give it 9/10
Link:http://itunes.apple.com/us/app/idyllic!/id445869482