With technology where it is, touch screens, infra-red controllers, it’s not surprising that gesture based games are starting to make their mark on the gaming world. Art Penguin is the second game from Indie Developer, Luck-u. You play as a wizard penguin who was on a flight home with a bunch of other penguins and some cows that was intercepted by aliens. But it seems that the aliens only wanted the cows so that they could drink milk whenever they wanted to, and ended up dumping you on a remote island somewhere in the ocean. You now have to make it through some pretty dangerous areas using your trusty wand to get home safely.
There’s 16 different gestures that you’ll need to memorize in order to make it through Art Penguin’s 2 worlds, each having 12 levels. At first, it may feel like you need to memorize thelevels in order to make it through them all the way, but once you get the hang of the gestures, it becomes a game that you play instead of a game that you need to memorize. Each level is built very well, having the difficulty increase at a great speed, so you won’t feel overwhelmed at first. By stage 3 you might have some trouble remembering which gestures do what. But thankfully, there’s a spell book in the top right corner that holds all the gestures you’ll need to know in order to make it through. The graphics are nice and cute, and the music fits the game very well. 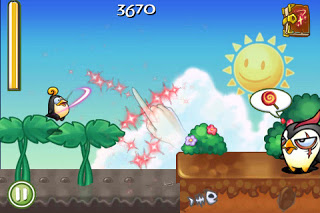 The challenge in Art Penguin comes from being able to remember and draw the shapes quickly enough. There’s some spots where you need to wait to see how big a hole is so that you’ll know if you need a spring, or a ramp, and some spots where you’ll need to draw different shapes one right after the other pretty quickly. You are given unlimited lives, but dying takes you back to the beginning of the stage. There is a pretty good sense of accomplishment once you do make it through each level. This structure kind of reminds me of older NES and SNES games of the late 80’s and 90’s, with the same great feeling after getting to the next stage. 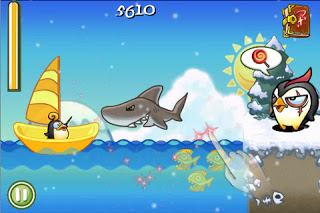 Art Penguin is available in the AppStore for $0.99, and really is the best gesture game I’ve played on any platform. Everything about it is very polished, and feels like it could have been released through a big company, like Chillingo, Halfbrick or Gamevil. The gameplay is actually exciting, which is a word I never thought would be able to be tied to a gesture based game, but with Art Penguin, it’s very fitting. Once you get the gestures down, it becomes a blast to play. It’s also OpenFeint enabled, and has 22 achievements for you to try and nab. I give it 4.5 stars out of 5, and if the occasional wrong item for the gesture drawn is fixed in an update, it would get 5 out of 5 stars.