It’s not too often we see a game come around and show us something new, but with Colorbox’s latest release, Candy Boy, they’ve shown that they have got some very creative minds in the studio. It seems that with each release, this small developing company gets more and more popular. After the releases of Arena Arcade, Dalton-The Awesome, Rooftop Escape, Rip Off, the ever so popular Wave-Against Every Beat, and Twins Candy, I wasn’t surewhat to expect. But this time they’re giving us a mixture of platformer and match-3 gameplay. Candy Boy hits that oh so sweet spot of genre mixing that makes us gamers wonder why something like it has not been made before.
You’ll play as Casper, a boy obsessed with candy who has woken up one day to find out there’s a group of candy hungry worms eating all your precious, mouth watering sweets, and it’s your job to stop them. You start off every screen sized stage with a certain number of candies, and end up using these candies to make groups of 3 or more, create candy towers to climb up on, and take out each of the worms hiding amongst the candies. You’ll also be dodging enemies and trying to get off of some platforms before they break. 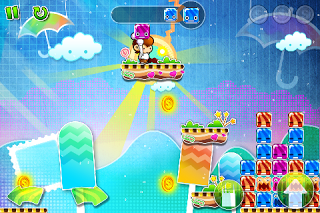 There’s quite a bit of old-school platforming to do in Candy Boy, which means there’s virtual controls and the games physics to try and get use to as well. Colorbox has done a pretty decent job giving us responsive and tight controls, though not as tight as League of Evil, or Mos Speedrun, but more like the controls in Elemental Rage or Castle of Magic. The physics are really nice as well, and don’t make the game feel weighed down or floaty at all. Moving platforms are decently sized, and collision detection is great, so you won’t be standing on air or falling through platforms. You might have slight problems using the candies as a climbing tool, and some of the thinner platforms in the mid and later levels, but it’s nothing you won’t get use to after doing it a couple of times. There’s also 3 coins in each stage you can try and grab if you’reup for more of a challenge, and grabbing every one in each stage will unlock worlds faster, as they’re opened up when you collect a certain number of them. All of this makes for some pretty neat level design, and challenging moments in the game. 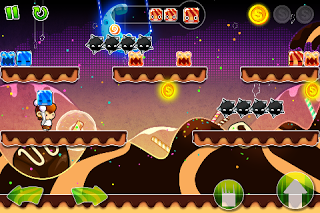 The graphics are very polished, very cute, and the animations are great. The music and fx also fit this cute world very well, and can be turned off in the main menu if you don’t care for game music. With over 100 levels spread across 4 different worlds, Candy Boy should offer plenty of gameplay to keep even hardcore gamers busy for a while, especially with the GameCenter leaderboards, one for each world, and the 13 achievements they’ve given us to try and unlock. And as with every other release from Colorbox that I own, I know Candy Boy will end up staying on my iPod for a very long time. It’s getting 5 out of 5 stars from me, and you can nab it in the AppStore for the very low price of $0.99.