Each week sees the shelves of app stores receive new batches of mobile games just released into the wilderness of the already flooded market. The great upshot of this flooding of new games apps is the continual competition for recognition by kids of all ages from 3 to 63, which causes the developers to try new and innovative approaches that often seems to be substantial improvements over the originating titles that first appeared on consoles and PCs. The discussion below highlights another number of highly worthwhile new arrivals. 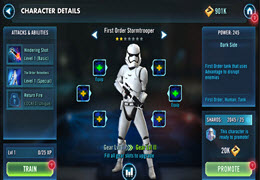 In the not too distant past, prior to Disney’s acquisition and subsequent closure of the much-adored LucasArts, there existed a browser and mobile game close to full completion would potentially have vanished forever. Enter the brand-new Star Wars: the Force Awakens which shot the brand back into its much-deserved limelight and in the process excited new and old fans from all over the globe. The game would arrive to an audience that welcomed it with open arms sporting complex main game mechanics unlike other games seem to date in this series. Players would have newfound ability to capture and there after control enemy outposts making it their own trade resource harvest that could also be utilised to build weapons, fulfilling most of the functions of an MMO.

Rayark quickly built a reputation for the company throughout Western markets after the release of its Triple-A grade mobile game called Implosion: Never Lose Hope that was followed up by ambitiously beautiful excellence in mobile gaming titles like Deemo during the past holidays, Rayark secretively hinted at a number of new titles the company looks to release somewhere during 2016. The new scheduled releases will include the promising blockbuster Soul of Eden, which they’ve recently released a cinematic preview video clip that excluded any game play footage, along with artwork visuals, and a brief description. The latest cinematic trailer teaser hinted at a summer 2016 window to release. Soul of Eden will deliver another brilliant RTS game with overtures of MOBA featuring CCG in its real-time battles.