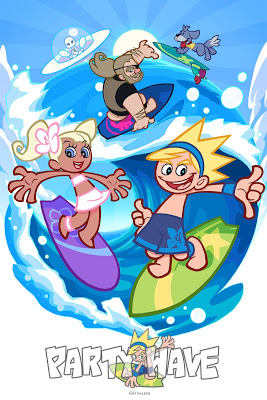 One of my favorite old-school video games has got to be Final Fantasty. Created by Hironobu Sakaguchi, pretty much everything his hands touched turned to gold; Kingdom Hearts, Parasite Eve, Vagrant Story, Legend of Mana, and loads more, Sakaguchi left Squre, created Mistwalker, and has since released some fantastic titles; Blue Dragon, Lost Odyssey, The Last Story, and more. Releasing titles on the XBOX 360, Nintendo DS, and Wii, Mistwalker finally found their way over to the AppStore with the release of Party Wave, a casual arcade title that has players controlling groups of surfers. 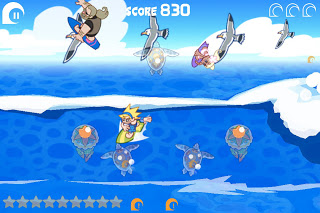 Surfing really isn’t a sport that’s touched on much in the iOS gaming world; Rising Board, Derby Surf, Line Surfer, South Surfers, ePig Surf and Robo Surf are the only titles that come to mind, and with other genres overflowing with games, it’s pretty surprising to only have a few surfing themed games laying around. But with the reputation of Mistwalker, Party Wave has the potential to blow them all out of the water, so to speak, even before checking it out. Fortunately, that’s not how things operate, and getting our hands on the game, seeing how the first step away from the RPG genre Mistwalker has taken, as well as how they approach the casual arcade genre, we’re pretty darn impressed. 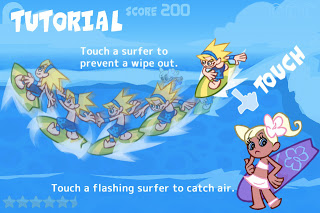 For those of you who have never heard the term, ‘Party Wave’ is a term for any large wave which several surfers ride on. And that’s exactly what you’ll be doing in the game. Starting off, you’ll guide each of the surfers to a specific spot in the water by swiping on them, flicking them to the area. Once you get all of the surfers there, the fun begins.
Each surfer will start to blink once they hit the bottom portion of the wave. This is your cue to tap them, sending them up and into the air. Once in the air, you can tap them again on their way up to do a trick, and again on their way down to do another trick. It sounds pretty simple, right? Just tap on the surfers when they’re at the bottom of the wave and in the air, no worries. But once you throw three or more of them together, and add in the hazards of the water, it can get very challenging, very quickly. What makes it even harder, is that some stages require that you get a certain number of perfect scores on previous levels in order to play them, and progress through the game, and sometimes you’ll need to go back and try and replay stages without having any surfers fall off of their boards. 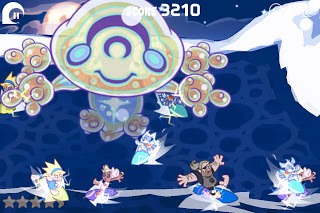 The gameplay is pretty straight forward, but can get awfully hectic at times. Quick reflexes, quicker thinking, and fast fingers are definitely an asset worth having if you’re going to compete on the leader boards, or complete the game. For those of you who really look for replay value when you get your iOS gaming on, Party Wave caters to you as well; the gameplay gets even more depthy the more you get into it. Perfect scores for getting all of your surfers on the wave, and not letting any of them fall off are great and everything, but what will really make you coming back, trying to max out your score? The little mechanics that add that special spark to a game, having it stand out above others within the genre, as well as all the titles available in the AppStore. 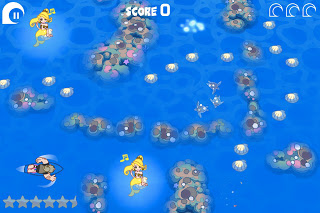 When you perfect clear a stage, stars start showing up. Collecting these while you’re playing will give you power-ups, like giving a surfer extra speed to make it to the wave catching area, which you can trigger by pausing the game, and touching the stars in the menu. You can also collect stars by touching the strange UFO which appears in the game at seemingly random times. Also, the closer you get to the hazards and objects in the first part of each level, while you’re flicking the surfers to the wave catching area will give you special little bonuses as well.
Something else that will keep you coming back? The special ultra spiffy Arcade Mode! Here, you’ll try and get through six sets of four stages in a certain amount of time. Doing tricks adds to your time limit, while running into hazards depletes it. Arcade Mode can get very difficult, but never in a frustrating way, and when you nail tricks just right, it can become a lot more fun than the already incredibly entertaining Level Mode. 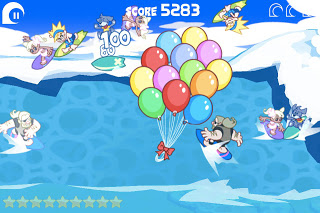 Party Wave, priced at $1.99, being Universal, and having GameCenter support with 2 leaderboards, one for your total score in the level stages, and another for Arcade Mode, is a fantastic title. The experience of Mistwalker definitely shines through out the entire game, from the graphics to the gameplay, and even down to the little special mechanics that make the gameplay deeper than it looks on the surface, and keep you coming back for more. Party Wave is a shining example that yes, everything Mr. Sakaguchi touches really does turn to gold.