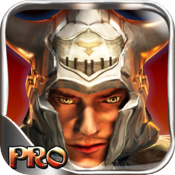 With the recent release of Pocket Heroes re-igniting my love for D&D parties, and bringing back memories of playing Diablo back in the late 90’s, I’ve been on a sort of quest of my own. To find all the Diabloesque and Fantasy Card games for the iOS that I can. Low and behold, one of the first titles I came across, and just can’t get enough of; Blade of Darkness – an open-world 3D RPG/hack-n-slash game developed by Zealm (developers of Monster Fight, Zombies Runner and Angry Zombie Ninja Vs. Vegetables). 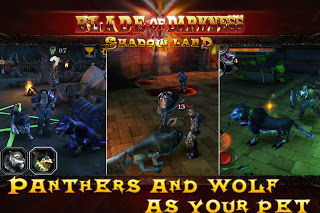 Blade of Darkness starts out with a pretty impressive cutscene giving you a bit of backstory; seems darkness overtook the land after a meteor shower rained down from the skies. Zombies and other undead creatures started to appear everywhere, and the darkness slowly spread. This land is appropriately named ‘Shadowland’. On the edge of Shadowland lies ‘Sanctuary‘; a campsite set up where a small patch of sunlight hit’s the ground. It’s here that you’ll begin your journey.
Actually, I guess I should say ‘it’s here where you’ll figure out what you’re supposed to be doing throughout the rest of the game.’ The tutorial is made up of 3 pop-ups. One telling you that the joystick in the lower left corner is for movement, another saying that the icon to the right is for jumping, and that to talk to people, you walk up to them and tap on them. Trust me, you won’t forget. Every time you come back to Sanctuary, you’ll need to go through the ‘tutorial’ before you get started again. From here on out, you’re on your own. 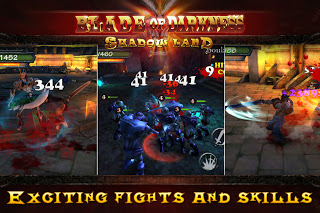 After figuring out that people in town with a “!” above their heads have a quest to send you on, you can try and figure out how to get out of Sanctuary. Turns out there’s a pathway right behind where you start from that leads out to two different warp areas, and from here, now you can start your journey. Your first task requires that you go to the East to find the wife of a wizard at camp. It seems they were separated, and he needs you to find her. Unfortunately, leaving the campsite will only take you South, through cemeteries, dungeons, and other dark lands which are full of undead creatures. Directions aren’t really accurate, and there will be quite a bit of exploring involved. 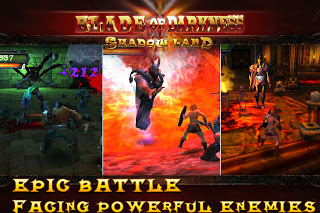 The battle system is in real time, and is kind of reminiscent of CrimsonHeart. If you just run into a pack of enemies slinging your sword around, you’ll find yourself in trouble fairly quickly. Standing back and luring a couple of enemies towards you, and watching how they attack and block will be a valuable asset to learn early on in the game. Running around to the back of enemies helps you avoid their shields, and can give you some massive hits. Of course, not all of the enemies require this tactic. There are some that will just stand there while you walk right up to them and bash their heads in. It’s all part of the combat system dance. I guess. Once you start killing enemies, they’ll start dropping gold and other items, and you can get your loot on. Figuring out how to pick items up is another task that you’ll need to figure out on your own. I’ll help you out; Tapping on the item inside the window that pops up will put it in your equipment pack. 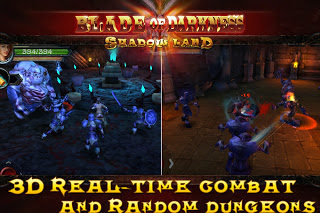 Don’t get me wrong. Once you figure everything in Blade of Darkness out, it’s really a fun game. But sticking with it through all of the figuring it out will be taxing, and currently priced at $0.99, there are going to be some people who just give up, and delete the game. But if you’re willing to stick it out, and not afraid to learn basically the whole UI on your own, the hack-n-slash, loot driven, Diablo reminiscent gameplay can be very rewarding. Finding those rare items, and beating the hell out of hundreds of enemies is great fun. You’re also able to play in CO-OP mode, which has the game controlling another hero along side you, Multiplayer Mode, where you can host or join another game, as well as an Arena Mode where you can battle other players online. Lets just hope that Zealm sells enough copies to be driven to keep the updates coming, because if they do, Blade of Darkness could turn into one hell of a Diabloesque title, and maybe even one of the top loot driven games on the iOS.