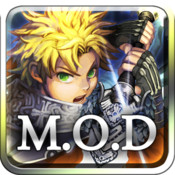 Ever since the release of CrimsonHeart, RPG fans have been looking for the next title to live up to the very high standards set by ANBSoft’s amazing title. Now, I won’t lie. Not one Action RPG title has made me come close to thinking of CrimsonHeart since. Until now. Playbean’s Master of Dungeon. What first brought on the memories of CrimsonHeart? The 360 degree movement. Yup, that’s really all it took. Once you play an Action RPG with 360 degree movement, all others seem stiff, and Playbean has nailed the movement, controls, and camera angles perfectly. The only question remaining; Does the rest of the game live up to the criteria of Crimsonheart? 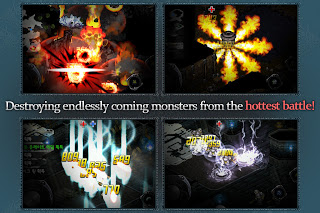 Master of Dungeon is a story about a place called World Tree. Light and Food is scarce, but the people of the land follow and believe in the Prophet, willing to do anything to please her. The English translation is pretty bad, and this isn’t helped by the text being broken up across lines (what a kawinkidink, just like CrimsonHeart!), but it’s understandable, and I never found myself at a loss for words not knowing what was going on in the story. Once you start you’re able to pick your class; Warrior, who has a strong physical attack with fencing skills and sword spheres, Assassin, who specializes in fist combat and is great when luck skills are increased, helping him find gold and rare item drops easier than the other classes, and the Wizard, who specializes in magic attacks and skills, and is better used at medium range instead of up close and personal. 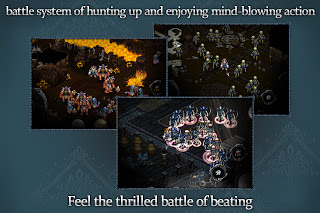 Each different class has a different skill tree, and these skill trees are pretty extensive, offering up numerous skills to use and expand on, helping you immensely throughout the game. The skills you wind up choosing will play a major roll, effecting combat, and guiding how you control your characters from the beginning of the game. Unfortunately, the combat is not equal to CrimsonHearts. Running into a swarm of enemies and hacking and slashing your way through them will not severely drain your HP, or effectively kill you. Instead, mob management plays a roll, guiding enemies into large groups so that you can easily take them all out at once. This does, however, bring down the amount of grinding needed in order to level up, and because you’ll be leveling up fairly often, you will be spending quite a bit of time managing your skill tree. 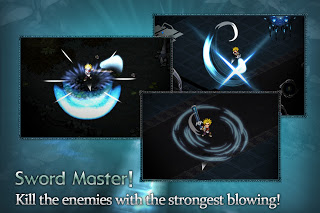 Master of Dungeon is set up so that you’ll constantly be visiting your tiny town in-between missions, talking to the townsfolk, progressing in the story, and starting new quests. Once you have your quests, there’s one exit out of the town, and it’s straight into a dungeon. When you start, you’re only able to go into one area of the dungeon, but as you progress, more areas will be opened, and you’ll be able to transport your character to these places directly, making it easier to navigate through the seemingly endless corridors of the world. Unfortunately, there’s not much in the way of environmental changes, which does have a pretty big impact on the game. Visiting essentially the same areas over and over again filled with different enemies does get a little boring after a while. 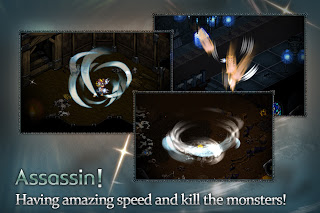 The graphics and animations are reminiscent of CrimsonHeart, though not as extravagant, the attacking animations do contain a lot of flare, and utilizing the strengths of each class, they really do make you feel like a badass. The movement, death, and re-appearing animations are also well done, also having animations for various impacts like confusion, poison, and more, making the gameplay pretty flashy. Along with the great music and sound effects, it does create a fairly immersive gameplay experience. 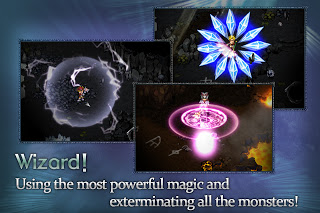 Priced at $3.99, and being Universal, it’s not a bad game by any means, and fans of the genre will love the 360 degree movement. It is better than CrimsonHeart? No. Not really. Is it better than most of the other Action RPGs out there? Yes. Yes it is. The 360 degree movement makes a huge difference in the gameplay, and even though it’s not equal to CrimsonHeart, I don’t think players want another game that’s exactly like CH, and I’m pretty sure Playbean knows this. There’s enough similarities to keep fans of CrimsonHeart satisfied, entertained, and hooked on the game, while also having enough differences to not be just a copy. Playbean has done a fantastic job here, and with a couple tweaks, it could rank right up there with CrimsonHeart as one of the best Action RPGs available in the AppStore.