Hex-based strategy games haven’t really been my cup of tea. New World Colony, Conquest!, Neuroshima Hex – none of them really did it for me, and with Neuroshima Hex being GameShark’s iOS GOTY, TouchGen’s runner up for Best Board Game, and a whole slew of fantastic reviews and press behind it, probably the ‘best of the best’ – I just figured the genre wasn’t really for me. Lucky for me, I was able to have an entirely different experience with Synaptic Wave’s (a 6 person outfit from the Ukraine, and developers of Tesla Wars and Tower Siege) Zombie Quest – Mastermind the Hexes! 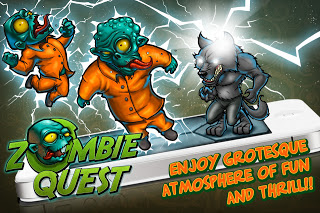 Maybe it appeals to me because I’m not a hardcore strategy fanatic, maybe I’ve still got some ‘casual’ gamer left in me from my early 20’s, I dunno, but Zombie Quest really hit’s the mark between casual and hardcore which is usually a difficult balance to achieve for most strategy developing studios, who generally go completely casual, or full-on hardcore within the genre.
With Zombie Quest, you’ll be able to think your way through 5 different enemies, including Pinhead, Dracula, Lecter, Frankenstein and Torquemada, each having 4 different stages with increasing difficulty. The gameplay is simple enough, yet full of strategy. Whenever it’s your turn, you select one of your wolf characters on the screen, and you can either select a spot directly next to them, which will clone your character, and turn any enemy characters that are touching that spot into one of your characters, or you can jump up to 3 spaces away, not cloning your character, but sometimes being able to make it into a group of enemy tiles, resulting in a huge addition to your team. The side with the most characters on the board when there are no more moves left for one of the players, or the board is full, wins. 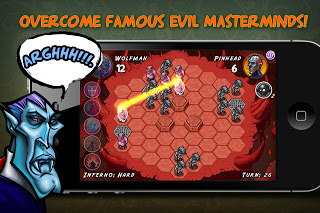 The addition of power-ups makes the gameplay even more strategic. At first, you’re only able to use a shield, protecting one of your wolfs from becoming an enemy if they move next to your character. The enemy is also given a power-up, in the case of your first enemy, Torquemada, he’s able to use a crane like power-up, removing one character from the board. Once you complete the 4 Torquemada stages, you’re given that power-up, and can use it throughout the rest of the game. Also adding to the game is a special 2 player, side-by-side mode, which lets you play with another player on the same device. With not too many 2-player-1-device games out there, it’s definitely a plus, and was a pretty big surprise to find included with the game. 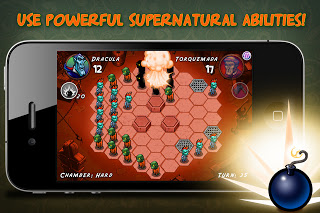 It’s not really anything that hasn’t been done before, I’m sure, though I’ve never had the pleasure of playing a hex based strategy game that does what Zombie Quest does, with a surprising amount of polish on the animations and graphics, as well as casual gameplay that could easily appeal to hardcore strategy gamers looking for something to blow through, or take their mind off of extremely deathy gameplay.
Zombie Quest also includes GameCenter integration with a total score leader board, and 15 achievements, adding some replay value to the game, but if you’re not really a high-score chaser, or achievement fanatic, the 20 levels don’t really offer up much replay value, and will probably not be a game you dive back into time and time again after completion. However, the time you do spend making your way through the game will be toughly enjoyed, especially if you’re new to the genre, or more of a casual gamer. 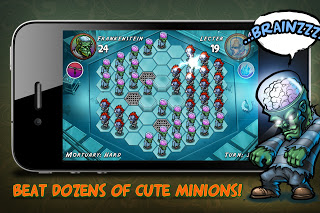 With a few fairly deep strategy hex based games in the AppStore, games like Zombie Quest is something we could definitely use more of. If you’re looking for something with loads of depth, and endless replay value, chances are, this is not for you. But priced at $0.99 for the SD version and $1.99 for the HD version, it’s worth snagging if your interested in getting into the genre, are looking for another 2 player on 1 device title, or are interested in something that won’t push your mind to the edge through every stage of the game. With their previous Synaptic Wave releases, the updates have definitely not been in short supply. Hopefully Zombie Quest will get a couple more enemies to take on, or maybe even multiplayer in the future. With the gameplay, it’s easy to see multiple different routes being taken, and hopefully Synaptic Wave will take advantage of that.