If you’ve been reading the reviewers here at TAS for a while, you’ve come to know that Point & Click games were have never really been a favorite of mine. That is, until I had the extreme pleasure of playing Machinarium, Yesterday, and Myst. And now I can add one more title to that very short list of P&C games that I’ve come to love; Telltale’s Walking Dead: The Game. A survival/horror adventure game, originally released for PC and MAC, ported over to the iOS. 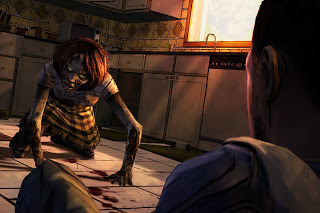 Now, I haven’t had the pleasure of playing the PC version of Walking Dead, and I don’t watch the TV show, mainly because my wife hates any sort of horror entertainment. I do, however, read the comics, and have come to really enjoy them. But when I heard that Telltale was going to be the team releasing the game on iOS, I was pretty skeptical. Their previous releases have been kind of hit or miss; Back to the Future – blah, Sam & Max – loved it, Law & Order – meh, Puzzle Agent – great. But after seeing the trailer, I was ready to be impressed, and after playing the first episode of Walking Dead: The Game; I am. 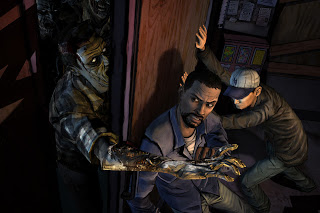 For those of you familiar with The Walking Dead, the game does not follow Rick his group of survivors. Instead, an entirely new storyline has been done for the game. You follow a convict, Lee, convicted of murder, as he tries to make his way to Mason, Georgia to find his family after being in a car crash that freed him from incarceration. On his way, he runs across a little girl, Clementine, who’s parents are somewhere in Savannah, GA, and whom you try to protect, as well as others who eventually make up the group of survivors that you’ll be following. 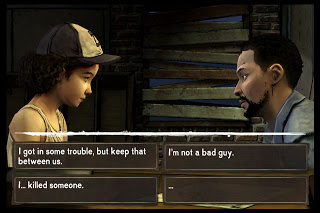 Controlling Lee is what really makes the game stand out as one of the best Telltale games to hit the AppStore. As you meet people, and get thrown into situations with zombies, you’ll need to make quick decisions regarding dialogue and actions. Instead of feeling like the game is controlling what you do, it’s more like you’re controlling the game, having an impact over what the other characters think of you, as well as who lives and who dies. What’s even better? These choices are apparently carried over across all of the episodes, so they stick with you throughout the entire game. 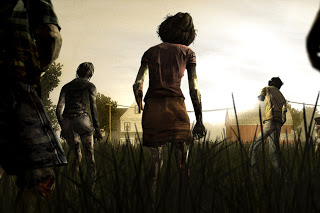 The graphics and animations are extremely well done, and incredibly reminiscent of the comics. The environments and objects are very well crafted, and create an incredible atmosphere. There have been times when I encountered some slowdown and general jerkiness, even while playing on my iPad 2, though not enough to really take away from the games fantastic immersive quality. The voice acting is another aspect which I found myself consistently being impressed by. All-n-all, it’s extremely well put-together. 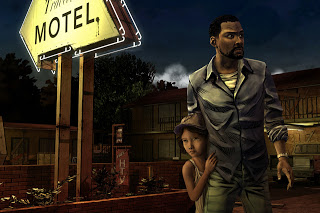 Priced at $4.99 for the first episode, and giving players the option to purchase the next 4 episodes for $14.99, it is a bit pricy. Especially considering there’s only about 3 hours of gameplay in the first episode. But if you’re a fan of the series (comic, TV, or both), this is definitely a game you should check out. Even if you’ve never seen an episode of the show, or read one comic, it’s still a fantastic Point & Click adventure game that deserves to be experienced. Once you complete the first episode, it definitely leaves you wanting more. Walking Dead: The Game has set a new standard for Telltale games, and one that I hope they live up to in the future.