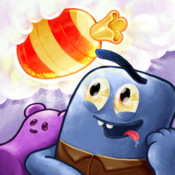 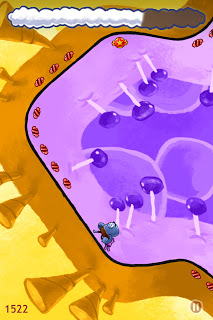 Last year, one of the more interesting platform puzzlers hit the AppStore; Deo, from the development studio Strapped to a Meteor. Since the release, they’ve been hard at work coming up with another unique and original game for the iOS, and it’s finally hit the AppStore. What is it this time? An endless runner called Mr. Dreamer. If you checked out our preview of the game about a week ago, then you already have a pretty good idea of what the game is. But if you haven’t, here’s the scoop.

Mr. Dreamer is a score-chasing, endless runner of sorts. On the main menu, you’re shown a strange little guy who’s stuck in an office cubicle with a stuffed animal by his side, pictures of his family on the walls, and the sounds of a keyboard clicking and phones ringing in the background. Looking bored and staring off into space, one you hit the ‘Play’ button, you’re off into a dream world, running up a two sided pathway in a dream world ripe with candy and sweets.

What makes Mr. Dreamer unique, as well as challenging, is the flipping mechanic that the game is centered around. Once you start running up this pathway, you need to keep the character up-right. If he happens to go up-side-down, a gauge at the top of the screen starts to drain. Luckily, you’re able to re-fill this gauge by collecting the candies that litter the path. 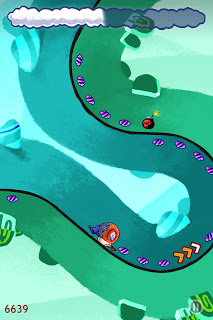 The game is split up into different level-like environments. Once you’ve completed one, the game will pause for a second while it loads the next one, and you’ll continue on your journey. This does, unfortunately, take away from the flow and smoothness of the game, but it does keep the original loading time down to a minimum, and the game running as smoothly as it can, though I have experienced some jitteriness while playing, even on an iPad 2. As you make your way up the path in the clouds, you’ll come across special candies. Collect 3 of these, and you’ll speed up, having all of the other candies drawn to you as if you were a magnet, and being up-side-down for this short period of time does not drain your gauge. After the first couple of levels, the game gets even more challenging by introducing bombs that sit on the path. If you’re unlucky enough to run into one of these, they’ll wind up draining quite a bit of your health/up-side-down gauge. Once the gauge is empty, it’s game over. 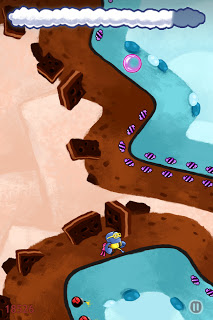 The graphics and animations are very well done, as you might expect coming from the developers of the wildly entertaining Deo. The sounds as well as the music fit the game perfectly, and the dreamy graphic look creates a great atmosphere. Sadly, there’s only this one gameplay mode, no other power-ups, no unlockables and no special abilities. Having a more difficult timed mode, or more power-ups along side the special candies would have greatly increased the gameplay, as well as the replay value.
But priced at $0.99 and being Universal, Mr. Dreamer is something the endless runner genre has yet to see, and for that fact alone it’s definitely worth picking up for the dollar, as coming across a unique runner these days is something that hardly ever happens. GameCenter is supported, but unfortunately, at this time, there is no leaderboard, and no achievements to collect, though I’m sure this will be fixed in a future update. Strapped to a Meteor has definitely kept with creating something out of the ordinary with Mr. Dreamer, and after the little issues get ironed out, will be a game that (hopefully) winds up pushing the genre forward with new and interesting ideas sprouting out because of it.