Castle Defense titles have become a great way to grab a few minutes of defense strategy gameplay while on the go, because of the AppStore. They’re great anywhere, appeal to a wide range of players, and hit that strategic nerve a lot of us gamers have without requiring us to play through a 2 hour game, or 45 minute level. While games like Stick and Cartoon Wars pioneered the genre on the iOS, games like Legendary Wars and the Fortune series pushed it more towards the hardcore strategy gamer, and that’s where Category 5 Games most recent title, Warmongers, fits in. 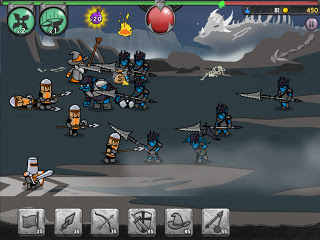 Warmongers is a single screen, 5 lane defense title, which requires quite a bit of strategy to progress through. While battling it out through hundreds of levels, you’ll be able to collect coins, unlock and upgrade characters, build up powers, and select special ability giving colors for your army. 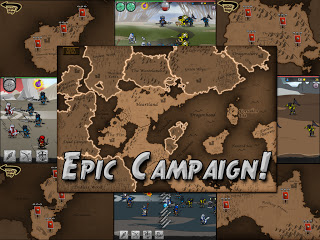 Starting off, you’ll need to play through one area, with 3 stages. Each of these stages has 3 separate battles that you’ll need to complete in order to take over the area. Once you battle your way through all 9 stages, each getting progressively harder than the last, the territory is yours. As you make your way through the territories, more and more battles are required to play through before you take the territory over.
In order to win a battle, you need to get enough of your characters over to the enemies side. At the top of the screen is a gauge, starting with each side locked at the middle. Once you get a character over to the enemies side, your gauge takes over a little bit of the enemies gauge. If they get a character over to your side, the gauge moves back. To win the battle, you need to completely own the enemies gauge. Sometimes it can take less than a minute, others, it’s an all out epic battle, going back and forth, with each side almost winning multiple times. It all depends on what characters you send out, when you send them out, what power ups you use and when, and when you use your special color ability. With each character you send out costing mana, and only 200 mana available to you at any given time, it’s usually a struggle the whole battle. 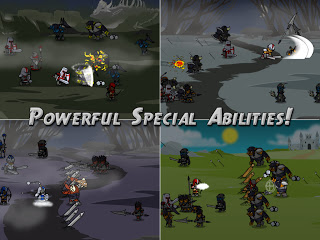 In the shop, you’re able to upgrade your characters, powers and colors. With each character, you can upgrade their level, which increases their defense, speed, and attack, or increase their attack and defense separately. You’re also able to purchase Bloodlust abilities, which are special attacks that can be used when your bloodlust gauge is filled.
There are IAPs in the shop, and with no levels being able to be replayed for extra coinage, and the pretty high cost of upgrades and character unlocks, and the difficulty brought on by only having 200 mana available to you at any given time throughout the game (with characters mana costs being between 35 and 45) it can feel like the game is pushing you towards purchasing extra coins quite a bit. This is a shame, because everything else within the game is top-notch. Unfortunately, this push to purchase extra consumable IAPs after the original purchase of the game can be a real deal breaker for many gamers. 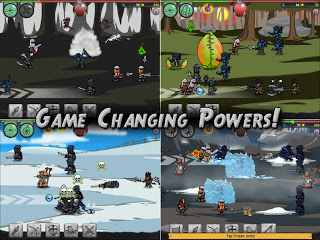 Right now, Warmongers is having a 50% off launching sale, and the iPhone version is priced at $0.99, with the HD version priced at $1.99. Considering it’s pushed towards purchasing extra coins through IAP, having a $1.99 and $3.99 title, and not being universal, it’s a hard game to recommend. But if you’re looking for a game that pushes you towards making certain upgrades without any experimentation, and loads of challenge, and high difficulty, then Warmongers is a strategy game you’ll most likely fall in love with.