Crescent Moon Games have definitely established themselves as one of the top developing and publishing teams in the AppStore. Aralon, Rimelands, Gears, Deadlock, Pocket RPG, and loads more have all gained a serious gamer following. Their constant support is also something that needs to be mentioned. Whenever there’s an issue, they’re on top of it, fixing it as soon as possible. Over the last year or so, they’ve turned their sights more towards publishing and working with other development teams, which has expanded their reach throughout various genres. RPGs, Platformers, Ball Rollers, Multiplayer, and now, with the latest release of Slingshot Racing, developed by Snowbolt Interactive, they’ve ventured into the Racing Genre.
Over the last couple years, iOS developers have really started trying out new things with racing games. Draw Race, Jet Car Stunts, QuBIT, jAggy Race, FishMoto and others have utilized the iDevice, and tried to reach out beyond the typical racing formula that most racers stick with. Slingshot Racing is definitely a game that can be added to the list of games striving to push the boundaries of the genre. 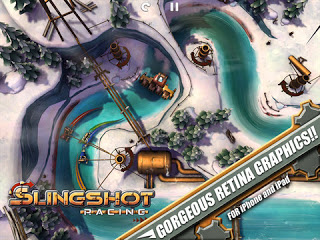 The controls are as simple as they can be; One Touch. Touching the screen makes your car fling out a grappling hook which attaches to rotating poles. Doing this lets you slingshot your car around corners. There is no gas or break, and your car drives on it’s own. The only thing you need to worry about is when to attach to these poles, and when to let go. Staying attached too long will result in you mashing your car into the side rails, while letting go too soon will cause the car to take the outer most part of the track, both causing the car to slow down dramatically. But once you get the timing down, you’ll be flying through the races, flinging your car around corners, and earning the 3 possible bolts (stars) for each stage. 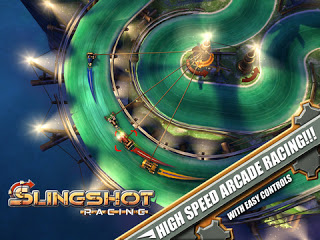 The campaign contains 64 races across 8 tracks, split up into different sections, each with an interesting name (like Winding Roads, Slingshot Mastery, Twist And Shoot, Wrap And Roll, and more) and containing 4 races each. Each of the races contain different objectives and hazards, also racing clockwise and counter clockwise during the day and night, which always keeps things fresh. There are 4 main different types of races. Racing against other racers, trying to place in 1st. Racing against other racers while a car eating machine trails behind you in an elimination type race. Solo racing while trying to collect bolts which are left on the track as quickly as you can, and solo time trials which push you to your limits trying to get the best time you can. 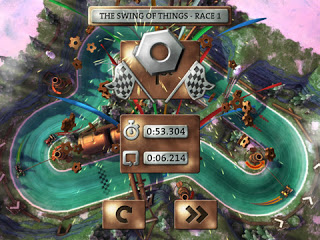 There’s also a multiplayer mode which lets you play with up to 3 other people on the same device. Of course this is more comfortable while playing on the iPad, but playing with 1 other person on the iPhone/iPod Touch is also easy enough, and doesn’t hit the frustrating factor at all. Within this mode, you’re able to choose which track to race on, how many tracks to race on, the order of the tracks, the number of laps, forward or reverse, and day or night. Each of the other players will have their own corner of the device to control their car, and when you really get into a racing battle, this multiplayer mode can end up being loads of fun. 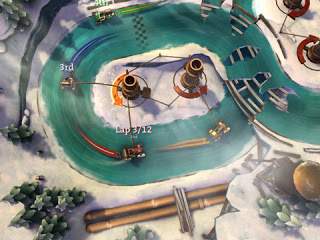 Since each of the races are pretty short, usually just 8 laps, or anywhere from 20 to 60 seconds, the frustration you might usually come across in other racers when screwing up with one little mistake towards the end of a race isn’t really found here. You don’t need to be perfect in order to get a 3 bolt score, except for on the time trial stages. For these, it’s pretty difficult to grab a perfect rating.
But if you are a fan of perfecting your laps, you’ll be very glad to hear that Slingshot Racing is supported by GameCenter, and has 18 separate leaderboards. That’s right, 18! One for your Total Bolts Earned, and boards for various stages throughout the game, ie; Shoot The Breeze Race 3, Sliding By Race 2, Slingshot Mastery Race 4, Melting Away Race 2, and so on. There are also 32 Achievements for you achievement hunters out there, all of which adds a TON to the already insanely high replay value.
Right now, Slingshot Racing is priced at $0.99. Like most Crescent Moon games, it’s on sale for launch, and will go up to $2.99 after a limited time. With the game being Universal, and with the current price, Slingshot Racing is a MUST BUY! The steam punk influenced graphics, and great music and effects combined with the simple controls, challenging gameplay and basically endless replay value make Slingshot Racing the best casual racer I’ve ever had the pleasure of playing, and even one of the best racers on the iDevice. Hopefully online Multiplayer through GameCenter or through isolated servers will be added in the future. Slingshot Racing is just begging for online MP. Something else that would be great to see is some unlockable vehicles or cosmetic customization. Each of the cars is equal in terms of speed, acceleration, and all other aspects, but being able to choose the color, shape, and other cosmetic attributes would be a nice little addition as well. As it stands now, Slingshot Racing is still a game that everyone with an iDevice should own. Be sure and check it out, and get your race on!