Strategy Games. Developers seem to quickly be realizing how great the touch screen and the strategy genre go together, and there’s a lot of iOS gamers who are very glad that this is finally happening. Offworld Game’s Turn Based Strategy title, Legion of the Damned was released late last year, getting lost in the onslaught of games that hit the AppStore around Christmas time. But this well thought-out, nicely voice acted TBS game is one you should definitely think about snagging. 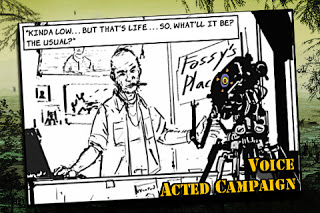 Legion of the Damned has some great gameplay, but this gameplay is also accompanied by a great story. The game starts off in prison, with an inmate being picked up and taken to the  execution chamber. Here, the inmate is given the chance, like all executed inmates, to be re-animated and added to nations army, The Legion. The inmate is then executed in the same manor in which he murdered an innocent girl.
If this is sounding familiar, it should. Legion of the Damned has a great story because it’s written by the author of the book, Legion of the Damned, William C. Dietz. To give you an idea of how big this is, Dietz has written tie-in novels for huge AAA games, such as Halo, Starcraft, and Mass Effect, as well as others, and has a fairly extensive list of original titles under his belt.
Not only does having a top-notch writer play into the story, but Offworld Games also hired 6 voice actors to do the dialogue in the game. There are some parts in which the voice acting is a little cheesy, but for the most part, it’s very well done, and coupled with the fantastic comic book type cut-scenes, adds a great level of immersion to the game. 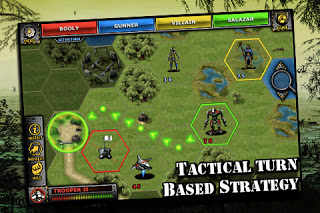 There are 3 modes in LotD; A 16 stage Campaign Mode, an online Multiplayer Mode that supports up to 4-players, which also supports 4-player local Multiplayer as well, and a Skirmish Mode, supporting everything that Strategy players could hope to see in a game these days. Making it even more interesting, Offworld has included a Custom Map Builder. Yeah, everything that Strategy players could want.
The gameplay is played out on hex-based maps, with each of your  different characters utilizing different skills. In order to complete the Campaign, you’ll need to figure out how to best make all of your characters work together, filling in for the others weaknesses with their strengths. This is definitely not a ‘build the strongest character up and spam the enemy’ type of game. You’re given 8 turns to capture as many flags as you can, or take out every one of the enemy soldiers. If the enemy has more flags in their control by the end of the 8 turns, or kills you off before then, you’ll need to replay the level.
Your main characters, the criminals-turned human-cyborgs are able to scout out the map, as well as attack the enemy, but they are fairly week defensively, and are very susceptible to mines. This is where your crawler machines come in handy, being able to defuse the mines. Moving them ahead of the group is something you’ll need to consistently do to complete the campaign levels. Then there’s your strong cyborgs, which can hit enemies without actually seeing them. However, if you send your humans forward, they can lock on to enemies, allowing the strong cyborgs to attack with full power. Each has different damage versus infantry, armor, and a fear effect. The Fear Effect results in causing the enemy to either retreat, or hold strong and fight back against you.
As for the stages, they’re generally the same type of environment. Grasslands with some trees, and water here and there. It’s about the same level of graphics as you would find with Wesnoth or Eustrath. To zoom in and out, you’re given a tab on the right side of the screen which you can move up or down. This takes a little getting use to, as most strategy games just have you pinch to zoom. 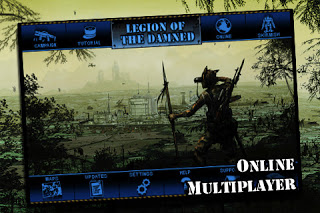 Right now, Offworld is working hard on fleshing out the online play with player profiles, invites, and more. Being priced at $5, but not being Universal, or including Game Center support [online play is handled by registering through the LotD site, and there’s not many online players ATM], it’s still a great buy. The skirmish and campaign modes are fantastic, and the gameplay has enough original mechanics to keep it interesting. Even if you’re not interested in the campaign or story, the skirmish mode is great, and even though there aren’t many online players, you can be sure that there the few that are there are willing to play. The game doesn’t look too bad in 2X mode on the iPad, but it’ll suffice, as the developers have said that a Universal and Retina update is also in the works. If you’re a fan of the genre, Legion of the Damned is definitely a title you’ll want to check out. Especially if you’re looking for a great story driven strategy game, as it’s easily one of the best available in the AppStore.