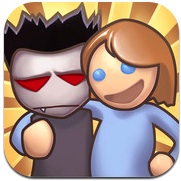 As the surprisingly long list of strategy games that are available in the AppStore keeps increasing, fans of the genre are in heaven. Strategy games are one of the few genres that completely and totally feel like they iDevice was specifically made for them. The latest Strategy title to hit my device is Brainss, developed by Lonely Few LLC. A game in which you run around a city hunting down humans and turning them into zombies. 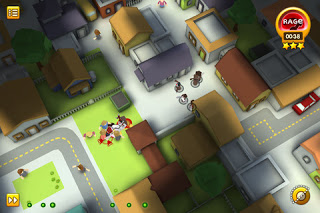 Right off the bat, there are a couple of things that bug me about Brainsss. You can’t zoom in or out. That’s right, there’s no pinch to zoom, which can be a real hassle, especially when you’re trying to control more than one group of zombies. There’s also no way to assign zombies to a specific group. So every time you want to move a zombie, or a group of zombies, it either needs to already be selected, or you’ll need to reselect it. This, coupled with no zooming out, means you can’t corner a group of humans by moving half of your zombies to one side of a building and then moving another group to the other side without having to select the first group, move them, then pan and scroll over to the other group, make sure that they’re selected, and then scroll back to where you want them to end up, and just hope that the first group didn’t drive away the humans already so that you can tap where you want your second group to go. Confusing? Yeah, confusing, and frustrating. Especially when every other RTS game has an easy select for groups of troops, and zooming in and out, and that’s what you’re use to having at your disposal while playing. 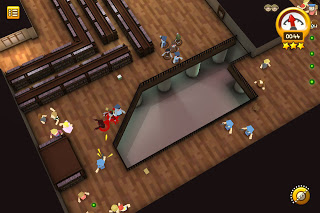 Aside from those couple of issues, Brainsss still is fairly fun to play. The action is fast, and so long as you’re fine with moving around one huge group of zombies around the maps, and don’t care about the time limit, getting 3 stars in a level, or earning achievements, there’s some fun to be had here.
Right now, there are 5 Phases (or worlds) to play through, each having 4 different levels except for Phase 1, which has 5 and is the Tutorial Phase. Each level has an objective that you’ll need to complete in order to progress. These range from turning all humans into zombies, or finding a certain type of human, like a policeman, or scientist, and turning him into a zombie, to stopping humans from reaching a helicopter, or getting a zombie to a specific zone on the map. 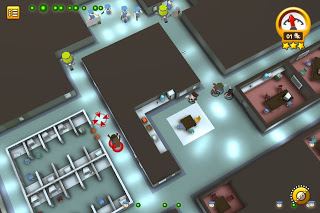 Unlike other RTS titles, there are no resources to be found and used, no skirmish mode, and no online multiplayer. You might want to call it a ‘RTS Lite’. And actually, as it plays right now, it’s more like an action game because it’s so difficult to use separate groups of zombies to pin down humans, and really go for achievements. However, if these issues are addressed, this could turn into a very nice strategy game. One that’s very fast moving, and will challenge you quite a bit, especially if you’re going to go for 3 stars, and going to try and snag all 70 (yes, that’s right, a whopping SEVENTY) achievements.
With the game being Universal, supporting the iPad 3 Retina display, having fantastic graphics, and great comic strips that you can unlock as you progress through the levels, as well as the promise of new levels released “each week”, $2.99 isn’t a bad price at all. I just hope that the developers include some of these features that are typical of most strategy games in one of their soon to come updates.