Beyond Dead
Metroidvania titles are essentially few and far between when compared to the sheer amount of games within every other genre. So every time a Metroidvania title pops up, I can’t help but get excited. When I first saw the screens for Monster Robot Studios (GravCat, Bridge The Gap, Occupy App) new game, Beyond Dead, my jaw just about hit the floor. The game looks like a great homage to old-school Metroid games, and for those of you who don’t know yet, Metroid II is my favorite game… OF ALL TIME. One little drawback though; GameSalad. 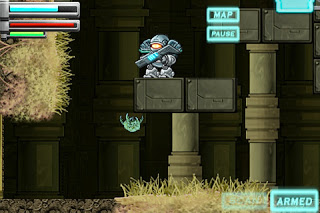 Gameplay; 3/5
Reminiscent of Metroid titles, something has gone wrong with terraforming project 1470. Two mercenaries, Tank and Vera, respond, and are after the truth. They make their way to the Asteriae system and need to explore the asteroid facility to find out what exactly went wrong. As you progress through the game, you’ll pick up stronger weapons, extra abilities, and battle zombie-like humans, along with monstrous beings, and slowly discover what’s happening within the facility. The story is well told, with no grammatical errors, and unfolds at a steady pace.
The action, however, is a bit on the slow side. You can shoot at and jump on your enemies, though both attack methods are fairly slow when it comes to killing. To avoid taking too much damage, you’ll be doing quite a bit of the run away, stop, take a couple shots, run away, stop, take a couple shots, ect… and that’s until you come across some stairs, which you’ll fall through if you’re going after a zombie because you’ll need to aim your weapon the correct way to use the stairs. While exploring, jumping can feel more like a hassle than anything, with a lot of platforms seemingly just out of reach until you try and make it to them more than a couple times.
There’s also the loading times. Typical GameSalad loading times, though moving from room to room is done in a flash, hitting the Pause button, or going to your Map will take about 4-5 seconds to load, and 4-5 seconds to exit, breaking up the gameplay quite a bit. The loading times between sections of the world aren’t so bad, as you’re given a pretty nifty picture to look at while the game is loading, but entering the Map and Pause menus can be a hassle. This is even more upsetting because of the exploration in the game. Don’t get me wrong, the exploration in Beyond Dead is fantastic. Completely reminiscent of old Metroid titles, which is great. Actually, it’s probably the strongest feature of the game. But breaking up the strongest feature of the game with loading times for the Map is… upsetting. I found myself constantly wishing that Monster Robot Studios used a different game engine.
Controls: 4/5
Control-wise, you’re given two options;
No-buttons: 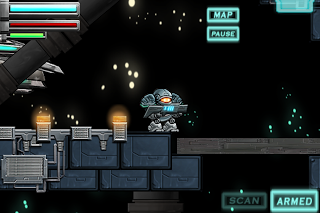 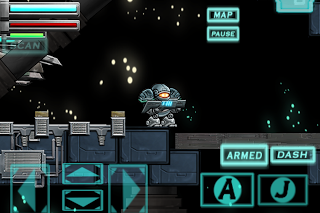 You’re given 4 arrows on the left side, two for left and right movement, and two in-between the movement buttons for aiming your weapon up and down. On the right side of the screen, there’s a jump button and a fire button, as well as dash and safety on/off buttons.
You’re able to change the controls in the pause menu, and are also able to make it so that you’re given the d-pad on the left side, while having the no-button set-up on the right, or having the buttons on the right, and the no-button set-up on the left. The only issues I have with the controls is that you don’t jump until you let go of the jump button, instead of jumping right when you touch the jump button, and sometimes the movement buttons are slightly un-responsive, causing your character to stop moving while walking, or in the air. Aside from this, the controls work pretty well, and being able to mix and match control set-ups to fit your gaming style was a great idea, implemented fairly well. 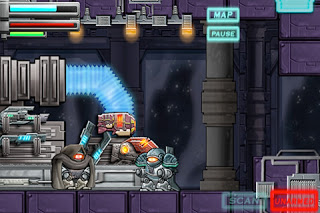 Graphics: 4/5
The graphics for Beyond Dead are really not bad, and at some points, when there are objects dangling from the ceiling close to the camera, like in the trash compactor area, look very nice. The animations for firing your weapon, jumping, enemy deaths, projectile collisions, explosions, they’re all there, and they’re not bad, but again, I can’t help but think that if this much effort was put into the game while using another engine, like Unity or Corona, that the game would look amazing. 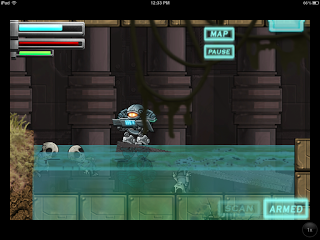 Content: 3/5
Right now, Beyond Dead only contains the first ‘episode’. More episodes are in the works at the moment, and talking to the developer, I can’t see any reason why they wouldn’t be added, but ever since the ordeal with Grokion, it’s hard to really push any game that has more worlds coming, or future episodes being made. But with Episode 1, there’s about 45 minutes of straight line gameplay, and then about an hour (maybe a little more) of exploration if you’re interested in looking for extra weapons, an energy tank, and just getting to know the whole game’s world.
As it is right now, there’s not a whole lot of replay value, if any, but hopefully GameCenter will be added in the future, and include achievements, and maybe a leader board for number of zombies killed, quickest times for completing the episodes, things like this, as they would give gamers incentive to run-through the game again after completion. 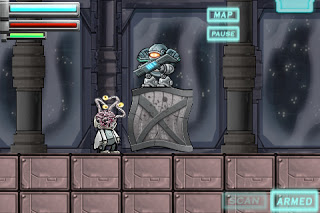 Overall: 3.5/5
You can tell that Beyond Dead has had a lot of work thrown into it. The graphics are great, especially considering they’re done within GameSalad, and the exploration throughout the first episode is done in a way that drives the game forward. Like I’ve said already, I can’t help but wish the game was made with another gaming engine, because Monster Robot Studios obviously has the talent it needs to create a very nice Metroid-like exploration action-platformer. For a dollar, and future episodes promised, at no extra price to those who pick the game up now, it’s worth buying, especially if you’re a fan of the Metroidvania genre. Just don’t expect a super polished, epic exploration game.