DARIUSBURST SP
With the hardware for iDevices getting more powerful year after year, it’s no surprise that iOS gamers are seeing more and more games ported over from other platforms. Luckily, quite a few of these games that are being ported over, are getting enhancements, and cost a fraction of their original price. Taito, recently bringing RayForce, a shmup from the early 90’s, released in Arcades, on the Sega Saturn, and Windows, over to the iOS, also decided to port over one of their newer titles, DariusBurst, a PSP and Arcade game, released only in Japan. Taito has also added quite a few features to the iOS version, giving it an all new SP Mode with new enemy patterns, and revised boss battles, as well as the Assault ship from the arcade version of the game, and new music. 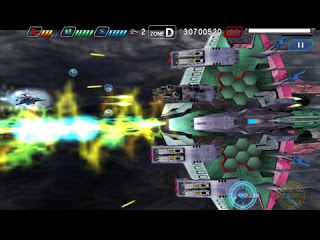 Gameplay: 5/5
With DariusBurst SP (Second Prologue) the setting switches between under-water and space levels, with the bosses being mechanical sea-creatures. This makes for 8 possible run-throughs of the game, and is a great change of pace from the standard World War/Vietnam shoot-em-ups that have cluttered the AppStore over the last couple years.
You’re able to choose between 4 ships, with 2 being locked when you first start the game. To unlock these, you’ll need to do a full run-through of the game in either Original or SP Mode, and to get the second locked ship, you’ll need to unlock Mission Mode, and complete 2 missions in Level 3. Each ship has their own strengths, multipliers, and burst shots.
Like other Darius games, you’re able to choose 5 stages while progressing through a pyramid set-up, having 11 levels in total. While blasting away, you’ll come across various enemies that will be colored either red, blue, or green, each powering up your shot, shield, and missiles.
There are 3 different gaming modes; Original, SP, and Mission. With Original Mode, you’ll be able to experience the original PSP version of the game, with the same enemy patterns and music. The SP Mode gives you a chance to blast through different enemy patterns, and revised boss battles, and all with a remixed soundtrack. With Mission Mode, you’re given 8 different levels to play through, each with 4 missions. You’re only given one life, and are put up either against a regular level without a boss, or only a boss battle, and are set to try and score as high as you can within those parameters. Mission Mode is unlocked once you’ve completed two different paths through the game in either Original or SP mode. 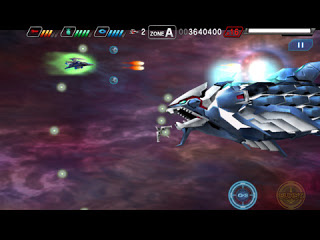 Scoring Mechanics: 4/5
The scoring system in DariusBurst is fairly simple, at least, compared to some of the other depthy scoring mechanics some other Bullet Hell titles have. You’re given a Shot Multiplier which increases as you take out enemies throughout the level and each time you’re hit, your Shot Multiplier goes down. The fastest way to increase the Shot Multiplier is to take out large groups of enemies with your burst shot.
Each ship has their own Burst Multiplier, which is added on to the Shot Multiplier. Each ship has their own Burst Multiplier. For instance, Legend and Next Zero ships both have a 6x Burst Multiplier, giving them a top multiplier of 96x. The Assault ship has a 7x Burst Multiplier, topping out at 112x. To take advantage of this, killing the last enemy in a formation, as well as the mid-bosses, bosses, boss pieces and large enemies will give you the highest scores.
You’re also given bonus points at the end of the game for the amount of ships that you have, getting 10 million bonus points for not dying once. There are also some routes that will give players more points than others. Basically, use your Burst to take out large groups of enemies, large enemies, mid and end level bosses, and try to not get hit or die, and you’ll score big. 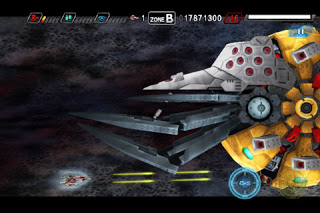 Graphics: 5/5
The graphics in DariusBurst are fantastic. 2.5D gameplay adds more depth than you would think, with ships able to fly by on the “right” and “left” sides of your ship before coming into “firing view”, and the backgrounds that move alongside the foregrounds where the gameplay is taking place looks gorgeous. There’s also areas where you might get dizzy because of the speed and way that the background moves about, giving the illusion of the ship turning down a 3D corridor, and out into space. Animations for the enemies, especially bosses, as well as the explosions, all look incredible. With the game being Universal, it really shines on the iPad 2, with crystal clear and very crisp visuals, it’s definitely one of the best looking games I’ve had the pleasure of playing on an iDevice over the last couple years. 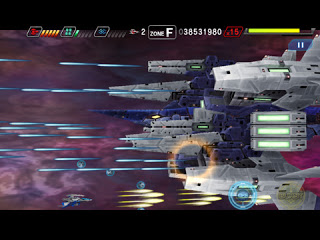 Replay Value: 5/5
As with most other shmups, DariusBurst comes along with a huge amount of replay value, especially with the Mission Mode Stages. There’s 3 difficulties, selectable in the Options Menu, GameCenter support with 17 leaderboards, and a whopping 59 achievements. With all 4 of the ships having different types of play, learning how to best play with each of them, along with the different paths you can choose from in both Original and SP Modes, the amount of replay value is extremely high, especially if you’re a completionist who’ll go after all 59 of the achievements.
DariusBurst is set up like a quarter sucking arcade game, and because of that, it has the potential of staying on your device forever. 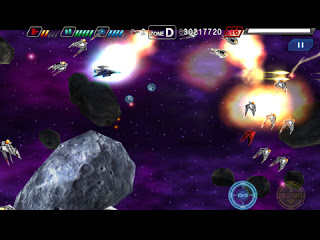 Overall: 5/5
Taito’s release of RayForce had quite a few fans of the shmup genre worried, as the controls were sketchy, and the gameplay not differing at all between iPhone and Arcade modes, but with the release of DariusBurst, and all of the extra effort that went into creating a special game for the device, Taito has re-claimed a spot directly under Cave on my favorite shmup+bullet hell developers list. The price of $10.99 is a GREAT deal, especially considering the PSP version is selling between $30 and a whopping $120, and doesn’t contain all the extras that the iOS version has. If you’re a fan of shmups, DariusBurst is a MUST BUY. Being Universal, beautiful on the iPad, smooth as butter on the iPod, and just a blast to play, Taito deserves to be supported for this. Hopefully other development companies see the support Taito is getting, and will take the iDevice more seriously. It’s games like this that push the AppStore forward, and give me hope that the device I use as my main gaming console will grow above and beyond ‘real’ gaming platforms.