Squirmee and the Puzzling Tree was one of my favorite puzzle games from last year. Lavafish Studios did a fantastic job with the mechanics, graphics, gameplay, and bringing a totally new and original title to the iOS. Not only did they bring a fantastic game to the iDevice, but also sent out update after update making the game better each and every time, and doing this while sales suffered. Well now Lavafish has just released their second iOS title, Zombie Bunnies, and as was with Squirmee, this one is completely original, and extremely polished, with loads of fun gameplay. 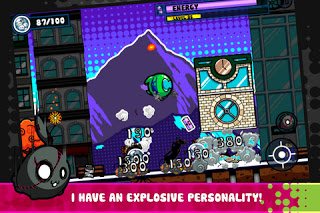 Gameplay: 5/5
In Zombie Bunnies you’re given a list of 5 objectives which you must complete all of in order to move on to the next set. These objectives are typical of games set up in this fashion, with Destroy 20 Vehicles, Collect 100 Bunnies, Reach Threat Level 5, Unlock Franky Bunny, and so on. You’ll need to blast away, hitting people, cars, buildings, birds, trees, and more, all of which add to your threat bar. Once you fill up this bar, you’ll progress to the next threat level. As you’re doing this, your health will be slowly depleting, and you’ll need to collect the energy , as well as ammo (bunny) pickups that are given and scattered randomly throughout the game. As you keep progressing, you’ll be able to unlock more bunnies, which also gives you more gun types. The second bunny you’ll get will give you a weapon that shoots zombie rabbits that comp off people’s heads. The third bunny drops bombs, and the last bunny shoots big meteors that can take out buildings and vehicles very easily. You’ll learn fairly quickly that in the later levels, switching between these types of guns will be necessary to climb up the leaderboards, complete achievements, and get through all 99 of the Threat Levels. Also, as you reach Threat Levels (every 5), you are able to start from that point in future games, which means you can be thrown right into the action, jumping ahead of all the boring easy levels as your skill increases. 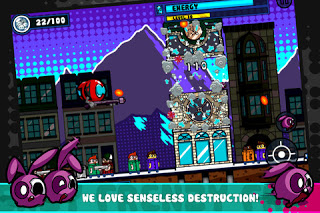 Controls: 5/5
The controls work very well within the game, with the left half of the screen for movement, and buttons on the right side for switching your gun, and firing the projectiles. For movement, all you need to do is either drag your finger slightly, and then keep holding down, or roll your finger around. It might sound like it wouldn’t work well, but here, it works great. Actually, after playing for about 10 minutes, I couldn’t imagine there being a virtual joystick for movement, as it would cover lots of the action on the bottom left side. 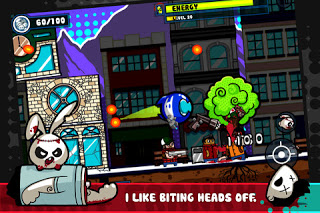 Graphics: 4/5
The environment which you’ll be playing in does not change much. There’s trees, loads of buildings, and even more people. But the graphic style of the game is great, and the animations are fantastic, especially for when people’s heads are eaten, and they fall to the ground. The character models for the bunnies you’re able to control are all great, and as you move on in the game, more and more enemies are added to the mayhem, each having very distinct outfits and looks, making them easy to tell apart.
Overall: 9.5/10
Lavafish Studios has done a fantastic job making a casual arcade game that gets progressively harder, building up to a difficulty that will keep even the most hardcore action fans challenged. With GameCenter leaderboards for highest score, total number of people killed, and furthest distance, along with 32 achievements, and only being $0.99, it’s a great buy that will offer up hours of entertainment, and depending on whether or not you’re a high-score chaser, Zombie Bunnies might just end up staying on your device for months.