Paper Monsters is a highly polished platformer in the vein of classic games like Super Mario Bros.  The graphics are spectacular and are reminiscent of Little Big Planet. 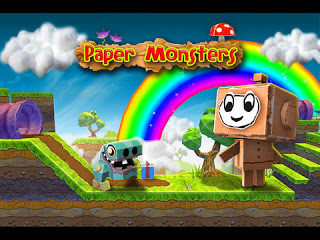 Gameplay: 5/5
As is typical of platformers your objective is to go from the left side of the stage to the finish line at the far right of the level.  Foreground and background objects are worked into the equation, allowing for a sense of immersion. As you move across the level you run into enemies and natural occurrences that can harm you.  To transfer to another part of the level all you have to do is jump into a pipe which is obviously a throwback to the Mario Bros.  Through these pipes you can travel to the platforms in the background making it a little more complex when trying to get to a specific spot.  You will usually be rewarded for your exploration by a golden paperclip, one of three that can be found in random places around the level.  Also found around the level are gold coins and treasures. Gold coins can be found in present boxes and can be redeemed in the in-game shop. Treasures, are also found in present boxes and if found give you an achievement from Gamecenter.  Another nifty feature is the ability of your hero to change into a specific vehicle once he enters a gold pipe. For example, later in the game you can use a small yellow submarine to navigate the underwater portions of the level.  This vehicle is not allowed to be brought outside of these specific stages. There is also a small endless runner mini game found in the main menu that allows you to collect coins without having to go through a full level. 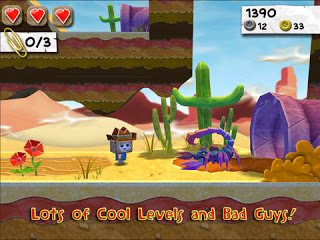 Controls: 4/5
You can choose one out of two types of control: Virtual Joystick or Classic Touchpad. Virtual Joystick is a 4 direction joystick that is fairly versatile and tight.  Whenever you touch the left side of the screen it reappears if you happened to lift up your thumb.  This can be fairly annoying if trying to get a jump exactly right, but works wonderful for everything else. Classic Touchpad is my personal favorite because of the fact that it is immovable and to walk you just slide your finger across it in the direction you want to go.  To jump you just tap the left side of the screen and to double jump you tap twice. 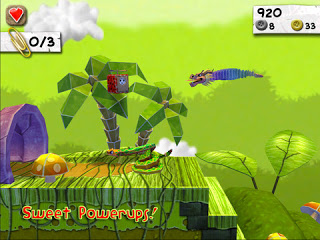 Length: 3.5/5
The game spans a total of 4 chapters which each have four levels making for a total of 16 levels overall.  I have reached Chapter 3 and gained three golden paperclips for each level. So far it has been a breeze to pass through the levels and have never really needed to restart a level due to error. The difficulty never really feels like it ramps up.  A new Valentines Day themed level pack is scheduled to be released sometime in February. 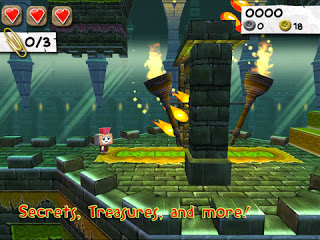 Overall: 4/5
Overall, Paper Monsters is a great platformer with throwbacks to both Super Mario Bros. and Little Big Planet.  The music and the art direction are superb and really bring together the whole experience. Though it may be a little content light the developers seem adamant to push out new updates constantly. Definitely a steal at $0.99.