Casual arcady games with an adventure type feeling are pretty popular among iOS gamers. Unlike the XBOX or PlayStation gamers, the AppStore is not really meant for hardcore gamers. With the current common pricing models developers and publishers have for the AppStore, it’s not surprising that it’s brought in a lot of people who normally would not play video games, or maybe even never played video games before owning an iPod. Ayopa Games, publishing their first two iOS games last week, Chicken Rescue, and W.E.L.D.E.R., has joined the parade of casual arcade publishers. 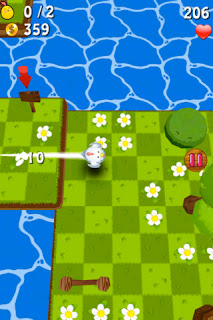 Chicken Rescue, developed by End Boss Games, a game in which you’ll control a mother chicken through 24 levels, using either accelerometer, gyroscope or virtual joystick controls, while she tries to find her missing children, and bring them all back to the chicken coop while collecting stars, apples, coins, breaking boxes, crates, and avoiding hazards, like pigs, cacti and falling off the edge of land into the water. The virtual joystick can be a tad unresponsive at times, which makes it seem a little clunky, it’s also pretty uncomfortable holding the iPod in Portrait view, instead of Landscape. If gamers were able to tilt their devices and have the game go from Portrait to Landscape, it would help make the game a lot more comfortable to play. There’s also no sensitivity options with tilt or gyro controls, and there really needs to be because the accelerometer controls are pretty touchy.
From the perspective of a hardcore gamer, Chicken Rescue can be a little easy, and get pretty boring fairly quickly. Using the tilt controls helps add a bit of challenge to the game, but fighting with the controls doesn’t exactly equal a fun kind of challenging. Chicken Rescue is more of a kid, or family game, which is not necessarily a bad thing. The AppStore does not have many family type games that are decent enough to be played by adults, as well as children, and even pre-pre-school kids. Collecting the flowers in each level along with finding the missing chick, is more designed to be fun for kids, but with the addition of the scoring system, which tacks on 10 points to each flower you snag without wasting too much time between them, does bring some more enjoyment to the game. There’s also some areas where you will need to use your dash ability, breaking boxes, to get to other areas, as well as using the dash to use rocks as ramps, getting flowers found in a higher area of the level.
GameCenter is also added, giving players 4 different leader boards; score, coins, completed levels, and overall completion, along with 8 achievements. This does have some added competition within the game for gamers looking for that extra little push of a challenge. There’s also a store where you can spend your collected coins, upgrading the combo time for collecting flowers, the number of coins found in each level, getting more shields in the levels, making the dash ability re-charge faster, increasing your health, and more. There are IAPs for coins, but you are not pushed towards buying them unless you would like more skins for your Mama Chicken, which cost 1,000 coins or more, and add abilities like increasing immunity time, or having apples restore health, and getting more points per flower combo. A lot of gamers do not like that you can pretty much buy your way up the leader boards, and can be a real deal-breaker when it comes to finally deciding whether or not to make that purchase. But considering it’s more of a kids/family game, it can also be seen as a way to make the game easier for little ones, so it’s hard to bash the developers for this model, especially since if you’re really wanting to get the different skins for your chicken, you can unlock them with in-game money. It will just take you a while to get them, as going through the whole game will usually get you about 1,000-2,000 coins. 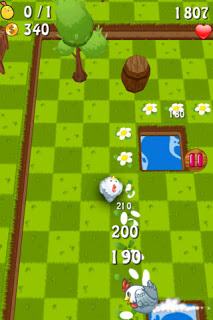 In the end, kids with their smaller hands will most likely have a blast with Chicken Rescue. But before it becomes a game that adults will want to play, Landscape mode is a must, along with some tightening up for the virtual joystick, as well as making it more responsive, and adding some sensitivity options to the accelerometer controls. There is enough content and the upgrades are decent, though the leader boards pretty much being able to buy the top scores is a pretty big turn off. We’ve got mixed feelings for the game, because we have kids, nephews and nieces who have played, and enjoyed Chicken Rescue quite a bit, and we’ve had fun playing it with them, but for most of our readers, this isn’t the case. If you have younger children, , and have been looking for another game that you can play with them, that they will find pretty easy to play, and still has enough challenge to keep you interested, or are a more casual gamer, who doesn‘t play games very seriously, Chicken Rescue is a good choice, especially at the current price of $0.99 (which will go up to $1.99 soon), and being Universal. But there’s a few things that need to be added and worked with before it becomes a game that more serious gamers will enjoy.
Chicken Rescue gets a score of 3 out of 5.