Earlier this year, developer Photics released an exploratory adventure game with RPG elements called Bot. It was made with GameSalad, and really did change my impressions of the engine. With a talented enough developer, GameSalad can really make something that people will want to play. Since then, there have been more talented GS developers coming out of the woodwork, to the point where GameSalad is no longer being laughed at when brought up. Anyway, back again, with another GameSalad game, Photics has just released an interesting plat former type game called Arch Fiery. 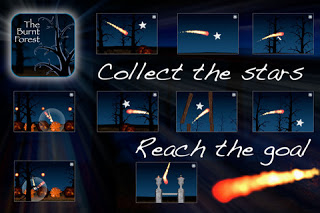 Sadly, one of the most interesting parts of the game, it’s story, is not found within the game it-self; only in the game’s description on iTunes. You’ll control a futuristic military weapon, a miniature star, designed to protect humanity from an artificial intelligence threat. However, during a systems test, the star ended up crashing in the middle of a forest damaging it’s propulsion systems. Now it can only jump. Having this actually put into the game would have made it quite a bit better. We’re suckers for cyberpunk type stories like this, and if Photics decided to reveal more story-line as the game progressed, it could have made for one hell of a game.
You’ll guide this star through 2 environments, and 24 levels. 12 forest levels, and 12 cityscape levels. An issue popped up for me here while trying to play the 4th level of the forest world, the game kept taking me to the 4th level of the cityscape world. This opened up the 4th city level while leaving the 2nd and 3rd levels still locked. The only way I could get to the 4th forest level was to play through the 3rd forest level. I’m not sure if there are any other instances like this throughout the game, but it can be kind of annoying not being taken to the level you tap on.
Aside from that, this game enjoyable enough, but chances are you‘ll see more of what the game doesn‘t have than what it does. Each level is set up like a small obstacle course, giving you objects to bounce off of once you jump off of the ground, platforms to rotate, opening up paths, and giving you 3 stars to collect, as well as fire orbs which make you larger, and in turn, gives you more opportunities to bounce off of harmful objects throughout the levels, and gives you more points at the end of each level. End of level points are determined by how many stars you collect, how many orbs of fire you collect, and how quickly you complete the level, while the ratings for each level depend on how many stars you collected. You can use either tilt or virtual controls, while tapping on the screen to jump. The physics are surprisingly well done, but it would be great if the star’s jumping height depended on how long you held your finger on the screen. Having only one jumping height never seems to add to a game. 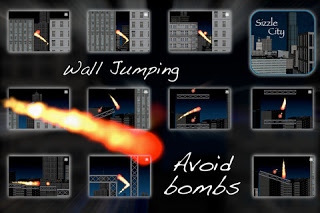 Photics last game, Bot, changed some gamers perceptions of what GameSalad can do. This latest game, Arch Fiery, is done with the same sort of graphic style, and has the same sort of ominous feeling to it, but it’s screaming for more. Power-ups, larger levels, jumping height based on tap length, more exploration. For $0.99, it’s still worth checking out, as it is an interesting game that has it’s moments. But it needs more before it really stands out as something special in the AppStore.
Arch Fiery gets a score of 6 out of 10.