Waves: Survivor is an endless type game with platformer controls from Renown Entertainment. In it, it’s your job to help Johnny Calm make it as far as he can while in his little boat, collecting coins, and avoiding, jumping on, or smacking enemies, all the while being chased by a huge shark. You’ll also battle huge waves and crazy water movement, sometimes taking on enough water to sink, and be thrown deep under water where you tilt to control your direction, and quickly tap the swim button in the bottom corner to make it back to the surface, and into your boat to travel further.

The graphics in Waves: Survivor are pretty nice, but not retina supported. The controls are nice and responsive, and work very well with the game, and the physics and overall feel of the game is great. Aside from the weird high jumping, the water physics are very nice, and do add to the atmosphere of the game. The sun and moon rising and setting helps as well. Along with the music, the game comes in a very nice neat little package. 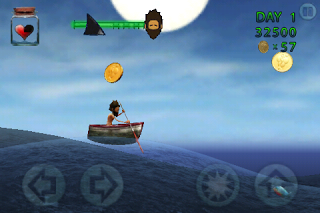 GameCenter is not added, so going for high scores doesn’t really drive the game much. However, there are collectibles that you can get while going through the game, which does help. A big part of the game is trying to not take on a bunch of water while waves crash against your boat, and you jump in and out of the water. Tilting your iPod controls the balance of the boat while in the air in in the water, and being able to control the angle of your boat does help with the amount of water you might get in the boat when you land, and while going up and down on the waves. Getting too much water in your boat, shown by a glass bottle around your health meter, thrown you into a mini-game that really disrupts game-play more than enhances it. But that can also mean there’s even more drive not to take on too much water throughout the game. 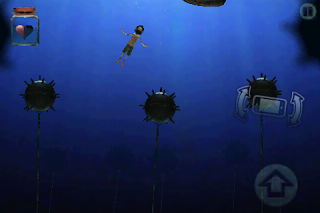 All-n-all, Waves: Survivor is a decent endless score game with great physics and graphics that could use some polish. But the gameplay really pushes you on, and will have you coming back to the game over and over again. Hopefully, GameCenter or Openfeint will be added in the future so that going for that high-score will drive the replay value up, and bring more players to the game.
I’m giving Waves: Survivor a score of 3/5.
Link: http://itunes.apple.com/us/app/waves-survivor/id393190599?mt=8
Posted in: 1.99, Action, Endless Runner, Syntheticvoid