Dust Those Bunnies is a new swiping arcade game from Gamers Rejoice. In it, you’ll be sweeping as many dust bunnies into a dust pan as you can in a certain amount of time while trying to avoid bomber bunnies and using power-ups. I should mention that this game was made using GameSalad. But it is one of only a couple GameSalad games that actually runs well on my 4th Gen Touch. In fact, I didn’t even know it was made using GameSalad until I read it on the Touch Arcade Forums. The load times are not bad at all, and the controls are nice, tight and responsive.

One of the first things you’ll notice about Dust Those Bunnies is the graphics. They’re black and white and look like a classic old film. They are done very well, and this decision to look like an old movie adds quite a bit to the polish of the game. The music sounds great, and with no sound effects, it adds even more to the feel of old silent films. There’s also a hidden sepia toned look for the game. We’re given two different game modes, one called Wage War, in which you’re given power-ups and 1:45 to get as many dust bunnies into the dust pan as you can. The other mode is called Commando, in this mode you’re given 1 minute with no power-ups to get as many dust bunnies into the dust pan as you can. Both modes are pretty challenging as you’ll need to keep an eye out for bomber bunnies that don’t look too different from the regular bunnies you’ll be sweeping up; one of their ears is a wick, and they have a different facial expression. You’re aloud to get of the bombers bunnies into the dust pan before they blow it up, and each one you do get into the pan takes away 25 points. If you manage to sweep them to the side of the pan, you’ll get 8 points. 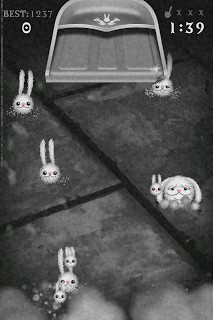 The scoring system is pretty nice. You get one point for each small bunny you can swipe into the dust pan, two for medium bunnies, and 4 for big bunnies. If you sweep more than one bunny into the pan at a time, you’ll get an extra point for each bunny. For instance, if you sweep 4 bunnies into the pan at once, you’ll get 4 points, one for each, plus 4 points for the combo bonus, totaling 8 points. In Wage War Mode, there’s power-ups that will help you a lot with scoring, but that are clearly harder to get into the dust pan than the bunnies, being heavier and disappearing after a short time. There’s a disco ball, with which you’ll get 10 points for every bunny you sweet into the pan, plus the regular bonus points for sweeping more than one bunny in at a time. There’s also a dust buster power-up which will pick up every bunny you drag your finger over, including the bomber bunnies. Micro fiber cloths will help you out by making all the bunnies follow your finger, and a pocket watch will add 15 seconds to the timer. There’s also various items which will give you 10, 15, and 50 points.
Sweeping the bunnies into the dust pan isn’t as easy as it sounds. You need to get the speed just right. Going too fast will leave bunnies behind your finger, and going too slow will cause them to go in all sorts of different directions. In the loading screen before playing it says “This is sweeping, slow and steady sweeps will win the war.“, and it couldn’t be more true.
There are unlockables in the game as well. You can get new brooms, which unlock depending on how many total sweeps you’ve made, and each make it easier to sweep more bunnies into the dust pan. New enemies, each with a different maneuvering mechanic, are unlocked when you get a certain amount of total bunnies into the pan, and then there’s new areas to sweep on, each with different textures, and are unlocked based on how many total games you’ve played. You’ll also be able to unlock new music tracks as you progress through the game, and there’s in-game medals to try and snag as well. All of this adds a lot to the replay value of the game, as do the GameCenter leaderboards, One for both of the game modes. 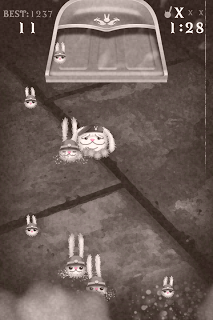 With all of the content in Dust Those Bunnies, it’s a great game to get for $0.99. This is the introductory price, and I’m guessing the regular price will be $1.99. It hasn’t been said when the price will go up, but I’m guessing it will be like most introductory prices and go up about one week from the release date, which was August 25. It’s a pretty original game, which is something we don’t see too often in the AppStore these days, and it’s presented in a very professional manner. Given that it was made with GameSalad makes it even slightly more impressive. If casual arcade games that can be played by hardcore gamers as well is something you’re into, Dust Those Bunnies will be a great game to pick up. For me, it’s joining the ranks of Tiny Wings, Kosmo Spin, and other great casual games that bring along quite a hefty challenge. The only things I would love to see in the future is maybe another game mode, something like Endless Mode, mixing all of the different types of bunnies, the in-game achievements moved to GameCenter, and some more obstacles blocking your sweeping paths in the different environments you can unlock. Other than that, there’s not much room for improvement with this quality title from Gamers Rejoice.
Dust Those Bunnies gets a score of 9.5/10
Link: http://itunes.apple.com/us/app/dust-those-bunnies!/id437429857?mt=8
Posted in: 0.99, Arcade, Casual, Swipe, Syntheticvoid