Everplay Games and FireFruitForge have teamed up to bring us an adrenaline fueled game with interesting mechanics that will keep you coming back for more. 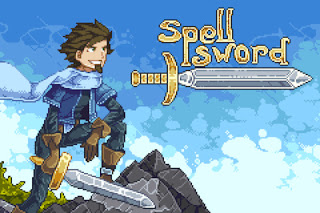 Summary:
Basically your goal in either of the game modes is to survive and either complete the mission available in the main career mode or get a new high score in the endless mode.  At your disposal is your trusty sword which you learn early wont do it when your up against a lot of enemies. The main power force in the game is magical cards which you can use when you walk over them. Once you do so the magical power inside of it unleashes and creates a differing effect based on the card. Think of it like Super Crate Box except with a fantasy setting and cards instead of crates. Dont get me wrong though, this is in no way a rip off of SCB. 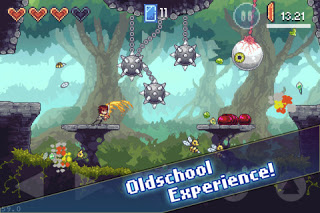 Controls: 4/5
The controls on the iPad I used to play it on were sufficient and the only real problems that I had with them were mainly my fault. The game utilizes the generic platformer set up with left/right arrows in the left corner and jump/attack buttons in the right corner with the pause button in the upper right corner. 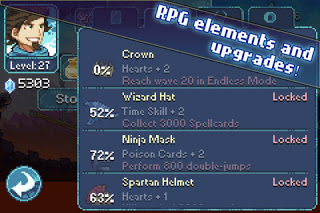 Gameplay:4.5/5
Really nothing to complain about here, fast paced gameplay, an endless mode, and a neat item shop where you can buy helmets and other assorted items that improve your game. The career mode has you doing missions, in areas that you unlock by obviously completing more missions. There are 20 missions contained in each area and they can range from survinvg a heavy onslaught of enemies for a certain period of time or collecting a certain number of magic cards. The missions are balanced nicely and present a good sized challenge to the seasoned platformer expert. 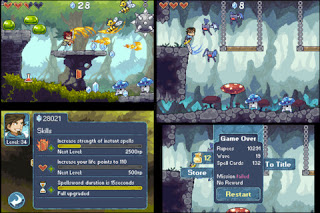 Graphics: 4/5
The graphics have a really nice look to them. Pixeled except not in a retro way. Though the graphics are extremely similiar to Terra Noctis’ (most likely because it was made by the same company) the areas are all different than the aforementioned game. 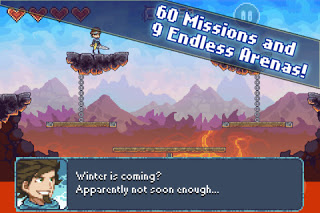 Overall: 4.5/5
Overall this is a great game with fast paced gameplay that is extremely addicting. And yes I know addicting is one of those buzz words that you shouldn’t use in a review as it can cheapen it, but this game truly deserves that title. Splendid graphics and music along with overall good design makes this a must have.

‘Super Crate Box Preview’ – Releasing on the 5th of January 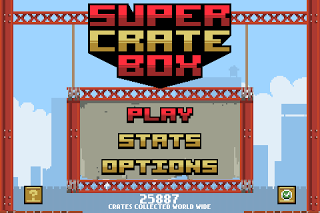 Super Crate Box for iOS is the lovechild of indie gaming studios Vlambeer and Halfbot.  Vlambeer, being new to the iOS crowd decided to collaborate with Halfbot, a studio that has already published their first game.  Though Super Crate Box or SCB for short was originally a PC game by Vlambeer, it translates well onto the smaller screen of iDevices.  The two studios spent countless hours perfecting the controls and cleaning up the code of the game.  The game was originally planned to be released in late December, but rather than rushing through the rest of their work they decided to postpone the launch and make it even better than it was before.
The new release date is five days from now on January 5th.

SCB is a game about speed, maneuverability and firepower. Your main goal is to collect as many crates as you can while dealing with the torrent of enemies flung at you over the course of your play session.  Every time you run over a crate you exchange your current weapon for another weapon you have already earned. This is both a blessing and a curse as you might get stuck in a situation with a gun that wont help you get out of it alive.  Crates are also important because they unlock new characters, weapons, levels and gameplay modes. 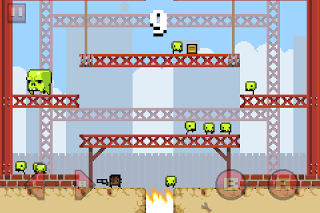 The controls are as tight as possible and I have not had any problems with them excluding human error.  The music is retro themed and gets your blood pumping. SCB is also Universal so it can work on your iPad and iPhone and has iCade support.
Overall this is a brilliant port and full of insane jaw dropping action that will keep you on the edge of your seat. At a launch price of $0.99 you wont want to miss this bad boy. Plus if a overall total of 5 million crates are collected by iOS gamers all over the world the developers promise to add iOS exclusive content in a update.

Here are some screenshots of the game in action:
(rather hard to catch good screenshots since this is such
a fast paced game) 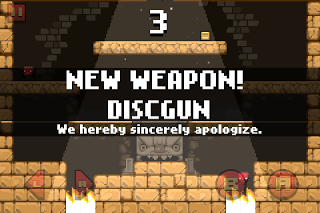 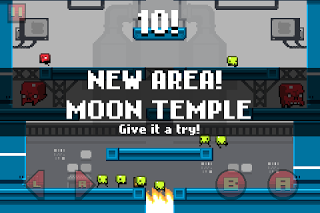 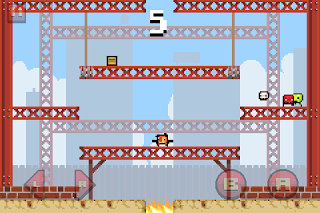 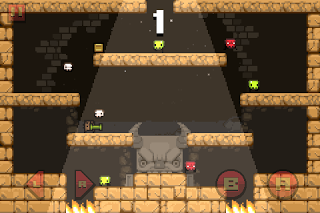 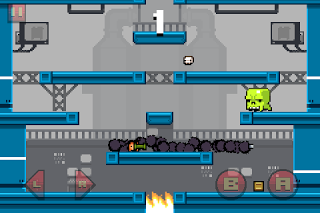 Worms. They are absolutely repulsive creatures used only to gross out people and to be placed in your parents spaghetti. But they seem to be used often as cute protagonists so I guess they have something going for them. 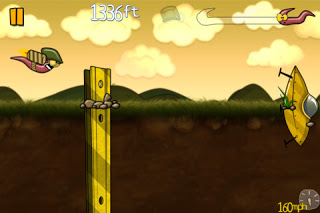 In this new worm filled adventure you star as a worm with a rocket on its back. Unfortunately at the party you are sleeping at, three jokesters light the rocket on your back causing you to be brutally propelled out of the window and into the world. It is your job as the player to take control of the worms path and make sure he doesn’t hit any obstacles on his flight. This is accomplished by taping the upper or lower part of the screen. By tapping the bottom of the screen you dive into the ground and by tapping the upper part you jump to avoid obstacles.  Obstacles are placed in various different locations, requiring you to think fast to avoid making the wrong move. Some are embedded halfway in the ground allowing you to either jump or dive to avoid them while others take up all of the above ground area.  Unfortunately after you have played through a few games all of the obstacles become fairly easy to avoid and not even your ever-increasing high speed makes these any more deadly. Also no new obstacles are introduced later in your never ending run so you can get bored of them easily. Also scattered among the level are power-ups which can do one of three things. Either give your worm another life, a helmet, or let him destroy anything in his path. You lose life’s by running into obstacles so its always a good idea to pickup a health or a helmet  pick-up. 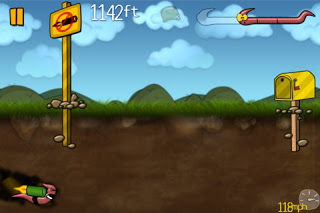 By completing certain pre-determined missions you can unlock new rocket types which don’t really do much other than look cool. If thats incentive enough for you to play hours and hours of this game then you really need to find something better to do with your time.  Another annoying feature of this game is its achievment system. They choose to use something called Kiip points. Apparently you can redeem these Kiip points for real world items from certain companies. This system miserably fails for this game as you can only use them for Kodak pictures and is a big nuisance when playing the game.

Overall this is a sub par endless runner which feels like a rip off of Tiny Wings and the original Worms franchise. I give it a 1/5.