Run Fox Run is a new endless runner by Icewire. In the game, you’ll be able to go through 3 different modes of play, Story, Endless, and Coin Mode. In Story Mode, you’ll be able to run through 24 levels spread up across 4 different environments, each with different enemies, and progressing difficulty. Endless Mode lets you face all of the 40 different enemies while running through environments from all 4 different worlds in Story Mode, while Coin Mode lets you run from the main menu. You’re able to hit an arrow up on the menu selection area so that the ‘Story” and “Endless” mode selections are not blocking up the screen, and then you can run as far as you can while collecting as many coins as possible. 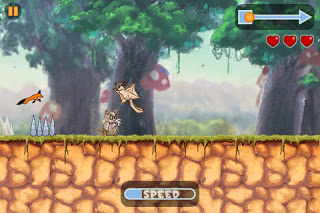 Each mode has different mechanics, and different ways of dealing with enemies. A lot of thought was put into the scoring of Run Fox Run, which is always nice to see no matter what genre you’re dealing with. In Story Mode, there is no score, but instead, you’re given 3 hearts to start out with, and have the option of trying to pick up more, up to 5, as they’re scattered throughout the level as item pick-ups. There’s a little gauge on the top right corner that lets you know how far you’ve gone in the level, and how far you have until the end. Jumping on enemies isn’t necessary, as there is no score, but if you run into or hit one of them, you’ll loose a heart. Loose all your hearts, and you’ll need to start over. Making it to the end of the level without loosing a heart, and you’ll get a C Star, that stands for Cunning. Collecting these perfect stars, along with progressing through the levels are the main points of playing in this mode.
Endless Mode has some more complex scoring, as you’re scored on distance. But jumping on enemies gives you a multiplier, increasing your distance score. A little 2x or 3x will stay above your fox for as long as the multiplier is active, while jumping on more enemies while the multiplier is shown above your head will add to it. You’re given 3 hearts, as well as heart pick-ups throughout the levels, to use before you die, and need to start from the beginning. There are level changes within Endless Mode, as the levels are about as long as Story Mode levels, but your score carries over from level to level.
In both Story and Endless Modes, there’s also power-ups. Many are scattered throughout the levels, and one is a power-up that keeps recharging after you use it. The rechargeable power-up, shown at the bottom of the screen, is a speed booster that leaves you invincible while it’s active. You can quickly run through groups of enemies very easily with this power-up enabled, and it keeps charging while you run. If you get hit by an enemy, the gauge will drop back about half way, and you’ll need to re-charge it again in order to use it. Some of the power-ups are a shield, a jump booster, a speed power-up booster which gives you a full speed gauge, and a power-up that kills all enemies on two platforms.
Coin Mode, played at the main menu, is more basic with it’s scoring, and doesn‘t use any power-ups or the speed ability. There’s two types of coins, one worth 1 point, and coins with silver around them, worth 5 points. The goal is to collect as many coins before you hit 1 enemy. Hitting an enemy automatically resets the coin counter back to zero, and you’ll keep running, trying to collect as many coins as you can all over again.
GameCenter and OpenFeint have two leader boards, one for Endless Mode, and one for Coin Mode, along with 27 achievements. The online support is a great addition, and adds a lot to the replay value of the game, even after finishing the Story Mode, and playing around with the other modes. There’s also a Credits Mode, where you can run and jump on enemies while the credits are playing. Jumping on an enemy shows you the name in the credits in a darker color, and is not scored, and has no real purpose other than to give you something to do while reading the credits. It is, however, a very nice addition, as no other game that I’ve seen lets you actually play through the credits. 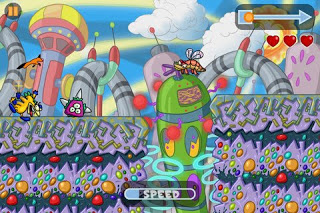 The graphics in Run Fox Run are done extremely well, with great environments, and painted backgrounds, the game is extremely vibrant, and professional looking. The animations are also very well done, from the running of the fox to the movement of the enemies, especially in the later levels with Abstract World. The music goes along fairly well with the game, and doesn’t get annoying at all. The effects also add quite a bit to the game, and it all creates quite a nice atmosphere. The controls in Run Fox Run are also very well done, having the fox’s jumping height dependant on how long you hold down on the screen, and never struggling for timing with unresponsive or laggy control.
Icewire has done an amazing job creating their first iOS game, and has shown that they know exactly what it takes to break into a genre already overflowing with great games and make their mark. Run Fox Run has more than enough content, and incredible replay value, with online support, and very responsive developers behind it all. For $0.99, it’s a great buy, and one that will end up staying on your device for a long, long time. I, for one, and very excited to see what the future holds for the new development company, and can’t wait to find out what they have in store for their next game.
Run Fox Run gets a perfect score of 10 out of 10, and is recommended to all fans of the endless runner genre.
Links:
Full Version – http://itunes.apple.com/us/app/run-fox-run/id461151279?mt=8
Website – http://www.runfoxrun.com/
Posted in: 0.99, Arcade, Endless, Platformer, Syntheticvoid

Fearless Ninja is a casual arcade game from Box Shaped Games (Max Injury + Max Injury 2). You will play as a ninja who needs to kill as many enemies as possible by collecting blue orbs that let you attack them, trying to get the highest score you can.

The graphics and animations in Fearless Ninja are done pretty well. The animations for attacking, movement, and the enemies is all top notch, while the background of the game looks nice. There is no variation in the environments though, and you’ll only see a couple of different enemies in the game until you get reasonably good. The variation with enemies is nice, but it would have been better if different enemies came out of the woodwork earlier in the game. Even playing on Easy, it took me 2 days before I saw the 3rd enemy. 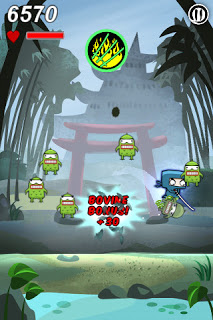 The controls are done well, giving you a tap option, which lets you use the corners of the screen kind of like arrows, tapping on the bottom right to move the ninja right, and left to move left, and a swipe control that’s still kind of hard to be precise with, swiping in the direction you want to move, making moving while attacking a difficult task.
Enemies are spawned about halfway up the screen, and bounce along the ground, making you weave and dodge through them while trying to get to the blue orbs that come down from the sky as well. The orbs send you into an attacking flip where you can either run into enemies, or bounce off of them, chaining together combos for bigger and better groups of points. The more enemies you kill before touching the ground, the bigger your score.
The main enemies only need one hit in order to be killed, but occasionally, a more powerful enemy will bounce across the screen, and need 4 hits. These enemies that need more hits are great for bouncing on, killing all the one hit enemies in the process, shooting your combo score through the roof. There are also scrolls that drop once you hit a certain amount of points, and collecting them lets you use a power-up. To start off, you’ll get a tornado attack, which lets you spin up into the air, and then float there for a second, hitting enemies as they spawn, and then floating back down to the ground. If you store these power-ups, and another scroll falls, you’ll get some added health, which can really help extend your game quite a bit. You’re given 4 hits on your health bar before you die, so saving up the power-ups until you really need them is rewarded well. 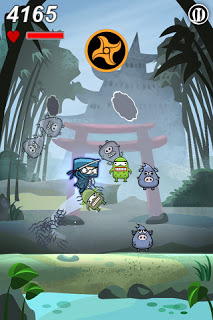 GameCenter has leader boards for each of the 3 difficulties, Easy, Medium, and Hard, as well as a leader boards for how many enemies you’ve killed in one play-through on each difficulty, and one Ninja Score leader board, which is calculated from your Easy, Medium, and Hard scores to rank every player. There is plenty of variety once you get conformable with the game to push the fact that there is no change in the environment to the back of your mind. Different enemies and power-ups coupled with getting the best combo you can to drive your score up will be your main focus. For $0.99, and Universal, Fearless Ninja is a great casual arcade game that will also fit well on any hardcore gamers iDevice. The challenge is high, but like most high-scoring arcade games, the replay value is higher, and once you feel like you’ve mastered the game, it’ll still be able to beat up on you. Hopefully more modes will be added in the future to help give the game a bit more variety, but as it is now, it’s definitely worth the price of admission. If you’re still curious, you can check out the game for free on the developer’s website, inside the Unity player.
Fearless Ninja gets a score of 7 out of 10.
Links;
Full Version – http://itunes.apple.com/us/app/fearless-ninja/id451921335?mt=8
Website – http://www.boxshapedgames.com/fearless/
Posted in: 0.99, Arcade, Casual, Endless, Syntheticvoid, Universal