In a recent release the pioneering Web browser from the developers at Mozilla have become available for service on iOS devices, however sit it seems to be just a shadow of its mighty desktop browser. Mozilla may still have the influence to sway open technology and web standards, but the relative lack of fortitude it has displayed with this latest release of its software in the mobile arena has left supporters of its technology with options that all seem to be extremely similar. 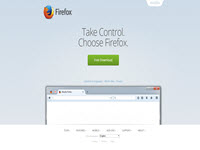 Firefox, recently allowed re-entry into the Apple App Store after numerous years spent in exile. Initially Apple banned Mozilla from its App Store, because the web-browsing giant remained committed to developing its apps via its Gecko render engine, whereas Apple at the time required that all iOS app development done via the WebKit render engine.

Recently the Mozilla team decided they would not sustain their commitment any further due to Apple’s unrelenting market power and the continual shift in the direction of mobile devices causes Firefox’s desktop reputation to have less and less meaning as time passes. All the above factors basically means is that Mozilla and Firefox now develop for iOS via WebKit; score one for Apple.

The company originally built its reputation by bringing competition back to a comprehensively dominated browser market by toppling Internet Explorer’s reign. It did so by driving with technology further forward at a faster pace than ever before to the great benefit of all. Before the initial break between the two companies Gecko, offered Mozilla a competitive edge with a decided market advantage, but two years later the tables have changed and Mozilla now finds themselves adhering to the rules in contrast to challenging the rules.

One of Firefox’s unique and most popular features to enjoy in its desktop browser was its powerful support to block ad extensions. Apple has now followed suit by endorsing ad blocking in its Safari mobile browser on iOS 9, and this is where the playground becomes in-equal with Firefox enjoying the status of a third-party app not being able to implement the ad blocking feature it most became known for while operating under the rules laid down by Apple.