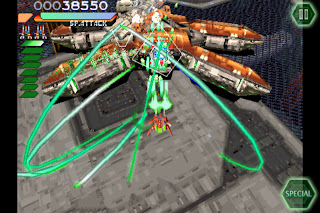 Shoot-em-ups are really thriving in the AppStore. But with Cave pretty much having a monopoly on the high-end, extremely polished side of things, it’s hard for others to really compare to the insanely high quality they bring to the table. Fortunately, there are some developers that can compete with this, Taito being one of them. The release of Space Invaders: Infinity Gene, and ports of DariusBurst and RayForce are considered to be some of the best non-Cave shmups available on the iOS, and with good reason. The gameplay, graphics, music and amount of polish are all top-notch. And now they’ve added one more game to the list of ports to hit the AppStore; RayStorm. Originally released for the PSX, SEGA Saturn, and for Arcades, it’s also been ported over to Windows, XBLA and the Playstation Network, it’s now available for your iDevice.
RayStorm is the only Taito Ray-title that’s not connected to the series. Released before RayForce and RayCrisis, what there is of a plot is not connected to the other two in any way. The game takes place between August 4th and 7th, starts on Earth, moves into space, and ends on the planet Secilia. Like RayForce on the iOS, RayStorm contains both an Arcade Mode as well as an iPhone Mode. The two play pretty much exactly the same, but with the iPhone Mode, the enemy placements, game music and color schemes are different, while the difficulty settings have been revised to make the gameplay a little easier. 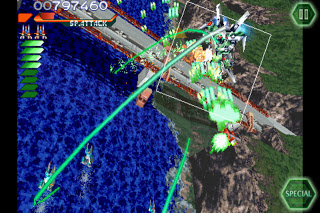 In the Options Menu, you’re able to set the difficulty for both modes to Very Easy, Easy, Normal and 5 different Hard Difficulties; Hard 1, Hard 2, Hard 3, Hard 4 and Very Hard. You can also change the movement ratio from 1:1 to 1:1.5, 1:2, 1:2.5, ect, up to 1:4, as well as change the button positioning from left to right. From the first time you start up the game, you’ll be able to start from any of the 7 stages in both modes and select between 2 different fighters. Both of these fighters have fairly different ways of playing and scoring; The R-Gray 1 uses a spread shot and can lock on to 8 enemies at once, while the R-Gray 2 uses a condensed laser shot, but can lock onto 16 enemies at once. The Gray1 is better for new-comers to the game/genre, while the Gray2 is built more for experienced players.
Graphically, RayStorm looks great on the small screen, but unfortunately, the game is only built for the iPod and iPhone, and does not contain retina graphics, so playing on the iPad requires 2X mode, and as a result, is pretty pixilated. But for fans of the genre, this shouldn’t really pose a problem, as there are very few HD/Retina shmups available in the AppStore, so it’s not really a deal breaker. The animations for shooting projectiles, movement and explosions are all fantastic, and with the movement of the backgrounds creating a 3D environment, even though some of the background images can look pretty ugly, coupled with the smooth controls, and great music, RayStorm turned out to be an incredibly immersive shooter. 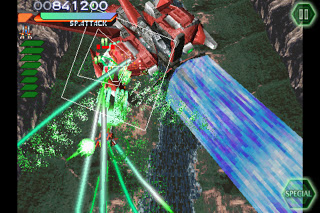 Priced at $8.99, and including GameCenter integration with 4 leaderboards, one for each ship in each mode, along with 31 achievements, chances are, even though it’s one of the better previously released shmups ported over to the iOS, only hardcore fans of the genre will wind up purchasing it. If you’re new to the genre, you might want to check out some of the cheaper titles before diving right in, but for fans of the genre, RayStorm is a great game, and is really only out-done by Cave’s titles. Taito has shown, once again, why they have been around since 1953, are still highly respected, and have a very loyal fan following.