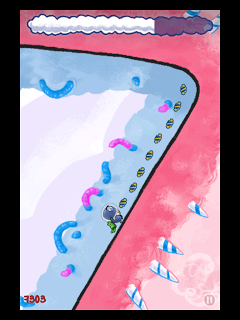 Last August, the iOS world was shown the second release from the development studio, Strapped To A Meteor; DEO. Mixing platforming elements with fairly strict timing to get around rotating levels set in a gloomy universe, the game received some very positive reviews and great player feedback. Since then, the STAM team has had their work cut out for themselves, trying to come up with something new that would match the uniqueness of the 7-person team’s previous releases (Go Go Giraffe being the other, and first iOS title); Enter Mr. Dreamer.
Mr. Dreamer is a score-chasing, endless runner, of sorts. On the main menu, you’re shown a strange little guy who’s stuck in an office’s cubicle with a stuffed animal by his side, pictures of his family on the walls, and the sounds of a keyboard clicking and phones ringing in the background, set to a pensive background musical loop. Looking bored and staring off into space, once you hit the ‘Play’ button, you’re off into a dream world, running up a two sided pathway in a dream world ripe with candy and sweets. 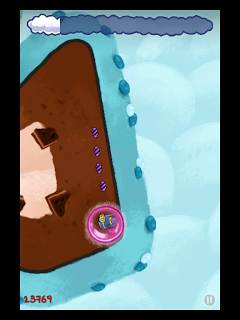 What makes the game interesting, and adds to the challenge, is that while you’re running up this pathway, you need to stay up-right. There’s a gauge at the top of the screen, which is kind of like your life bar. Every time you’re up-side-down, this bar goes down, and once it’s empty, it’s Game Over, but to keep it from being a fairly short game, collecting candies will re-fill this gauge.
We’re pretty psyched about Mr. Dreamer, as Strapped To A Meteor’s previous titles definitely added something new to the AppStore, and had us stuck on em for quite a while. We’ll be able to find out more and will have a review for you once the game is officially released on July 31st. If you’re a fan of endless runners, be sure to keep an eye out for this one.
Posted in: NEWS, Preview