About a year ago, on the Touch Arcade Forums, I got involved in the GameCenter boards for Mos Speedrun with a couple of other players. Much to my surprise, a couple of those players went off, and created their own development studio, BeaverTap Games, and now they’re getting wildly close to the release of their own plat former, Mikey Shorts. Lucky me, I’ve been helping to beta test the game, and when I asked the crew if I could post up some pre-release images and share a little bit of info, they were happy to let me. So here it is. 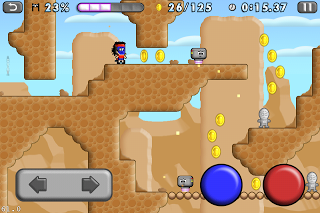 Mikey Shorts is a sort of casual speed run plat former. The times for 3 staring each level are not as strict as they are in, say, League of Evil, Mos Speedrun, or many other speed run plat formers out there now. There are also no enemies. That’s right. No enemies at all. But that doesn’t mean that you won’t be running into little creatures that you can destroy. Throughout each of the levels there are tons of little robots which you can either destroy or use to jump off of and reach higher platforms. It’s a great little gameplay mechanic, and really does come in handy later on in the game. 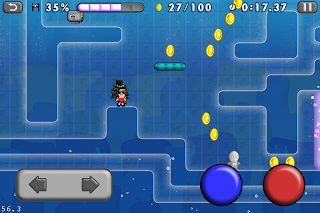 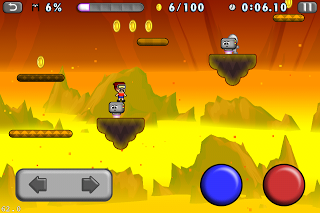 The gameplay, like most titles in the genre, is fairly simple, but with it’s simplicity, and the amazing level designs, can get very challenging. You’re given left/right buttons, a jump button, and a slide button. With the slide button, you’re able to slide into the robots, destroying them, as well as slide under paths in the levels, which you wouldn’t be able to reach otherwise. This constant running, jumping and sliding is all centered around collecting statues of Mikey. In order to pass through each of the levels checkpoints, you’ll need to collect all of the statues between them. They are usually set up on one path from point A to B, but the addition of the enemies, as well as coins, throughout the levels, branching off on separate paths, will have you needing to quickly decide if you want to try and collect all the coins you can, or get to the end of the level as fast as you can. It kind of reminds me of Hypership Out Of Control, with the coins leading you right into a wall at high speeds. Same thing here. 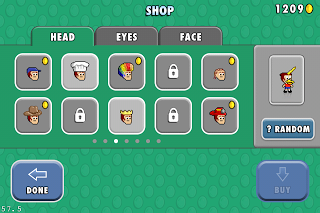 Mikey Shorts is full of content, including 24 main levels split up between 6 worlds, 48 challenge levels, and an insane amount of unlockable cosmetic features which you can dress Mikey up with. It’ll be Universal, priced at $0.99, and hit the AppStore sometime this summer. We’ll get more information as the release date approaches, but until then, check out the screens, and the sneak peak video.
Posted in: NEWS, Preview