One of my favorite iOS games has got to be Hook Champ. The amount of content, the gameplay, the mechanics, controls, items, everything is just fantastic. But since, there hasn’t really been a game that comes close to the type of gameplay without feeling dull, stiff, or just no fun. Sweden based A Small Game’s most recent iOS title, Hanger, has changed that all around, matching gameplay reminiscent of the Hook titles, with the feeling of Karoshi. 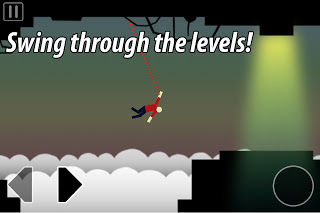 Hanger is a game which has you controlling characters who are trying to use a rope to fling themselves through various environments, some seeming extremely strange, to get to the end of the stage while loosing the fewest amount of body parts they can. That’s right, legs, arms, torsos and loads of blood will go flying all over the stage while your characters are Tarzaning it through the levels. 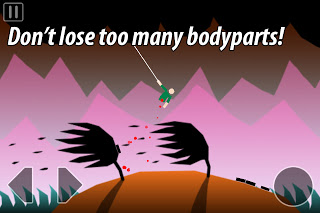 There are two gameplay modes in Hanger, Levels, which is kind of a Story Mode, with little clip scenes at the beginning of each world, and Endless Mode, which, you guessed it, has you flinging your character as far as you can before they’re nothing more than an arm and head, or fall to their doom. Right now, there are only two worlds and 30 levels in Level Mode, but each level has a possible 3 star rating, which depends on how many ropes you use, the number of body parts you loose, and how many gems you can collect while going through the level. The base score is 50,000, and for each rope you use, 500 points is deducted, while each body part you loose deducts 1,000 points. The gems that you collect give you 200 points each, so you can either try and make your way through the stage by using the least amount of ropes, going quick, and praying to god that you don’t smack into a wall or whatever other strange object the environment is made out of, or you can go slow, and collect all of the gems, giving you a bigger bonus score at the end of the stage, or you can do a little bit of both, it’s really up to you. 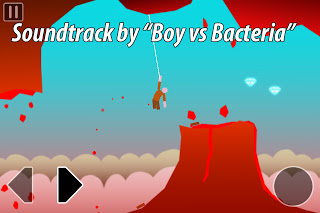 The graphics are retro inspired, with stickman people, and very interesting backgrounds, all effecting the level’s names; for instance, in the level, ‘Party’, you’ll come across bottles of Champaign, laughing heads, fancy hands, and more, while the level titled ‘Forest’ will have you swinging from trees. Now, I’m not usually a fan of rag doll physics, but here, the physics in Hanger, are fantastic. Flinging your rag doll stick figure, always having a name, which is, by the way, a great addition to the game, through each of the levels looks and feels fantastic. A Small Game’s developers nailed the physics portion of Hanger. The controls are also spot on, with left/right arrows and a rope button, which you’ll press to detach your rope, and again to shoot your rope out. 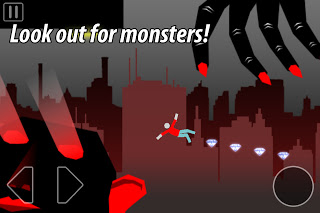 Right now, priced at $0.99, it’s a fantastic buy. The price will go up soon to $1.99, which is still, a great price for this game. More worlds for Level Mode are in the works, but with Endless Mode, there’s loads of gameplay, as well as replayability. Also adding to the replay value, GameCenter’s 15 achievements and 6 different leaderboards, one for each Level Mode World’s total score, as well as one for each of the 4 separate Endless Mode levels. A couple things I would love to see added is an HD build, or an update to make the iPhone version Universal, as well as an option to move the controls around to where you’d like them on the screen; especially if the game becomes Universal or HD, as on the iPad, the buttons are kind of far inward. But still, I’ve been having a blast with Hanger, and really, can not recommend it enough, especially for fans of Hook Champ, Karoshi, and score-chasing games. I can see Hanger easily becoming a classic iOS game.
If you’re still interested, but on the fence, you can check out the Flash Version at NotDoppler.