Endless games are a staple of the AppStore. Almost everyone has more than a handful of them, and even if you’re sick to death of all of the endless runner/climber/diver/jumper releases, chances are, there’s at least one or two (or ten) that will never leave your iDevice. Captain Antarctica, FDG’s newest release developed by Ideal Bureaucracy, might just wind up turning into one of those rare titles. At the moment, Captain Antarctica isn’t an Endless Runner, per say. It’s level based. But there is an endless mode coming in a future update. 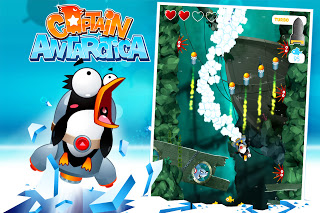 You’ll control Captain Antarctica, a penguin who’s on a mission to save his family. After his wife and children were kidnapped, Captain Antarctica decided to team up with a wacky scientist who’s invented an underwater jetpack suitable for a penguin to wear. Now it’s up to you to make your way through 6 different levels, each with a boss battle at the end, and manage to save your wife and kids.
Captain Antarctica is a diver. You’ll need to dive down into the depths of the ocean in order to defeat each level’s boss, and move onto the next one. Fortunately, these 6 levels will take multiple replays in order to beat the bosses. Each time you make it through the stage and down to the boss, you’ll be able to attack him once, knocking off a piece of armor, or injuring him. Also adding to the amount of times you’ll play through each level are objectives. These objectives help you earn coins which you can use to upgrade and buy equipment in the shop. 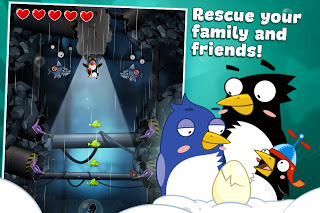 There are IAPs included in the game, but these are, like most games, only if you’d like to outfit your character with all of the best gear right when you get the game, or want to show your support for the developer, sending them a couple extra bucks.
In the shop, you’ll be able to purchase Utilities, including extra health, a better flashlight so that you can see better in the deep dark ocean, rescue buttons, which let you stay alive if you run out of health, and rush kits, which torpedo you down at light-speed. Bonus items are also available to be upgraded. You can increase your booster, upgrade your magnet, get a better shield, or upgrade your portal gun. There’s also cosmetic upgrades for your jet, you can purchase a trash can, flower, fruit, smiley, Soviet and more jets. Unfortunately, none of the jets increase your speed or agility, and are strictly cosmetic, though it would have been great if each of them had stats. 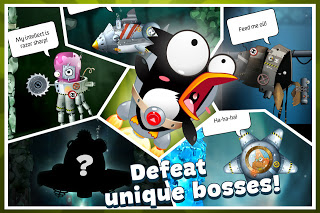 As you make your way through each level, you’ll be able to collect goldfish and various power-ups while avoiding the wall’s edges, sea urchins, fish, bombs, and other hazards. As you collect the goldfish, you’ll fill up your jet’s booster gauge, which will propel you down to the depths quicker once filled.
The graphics and animations are fairly polished, though having some better animations for when the penguin collides with objects, instead of just having him flash, and having explosions when you come into contact with bombs, would have been great. The comic strips however, look fantastic, and are one of the definite highlights of the game. The music and effects are a little cheesy, but they fit the game well. 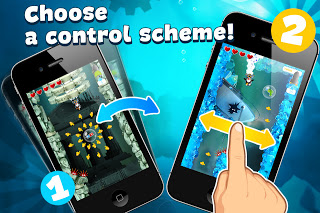 Captain Antarctica is priced at $0.99 for the iPhone, and $1.99 for the iPad version. There’s not really a lot of content, but with the added objectives, and soon-to-come endless mode, it definitely has a chance of staying on your device for a while, especially if you’re interested in competing on the GameCenter Leaderboards for Total Coins Earned, and Total Distance Traveled. There’s also 32 achievements, adding quite a bit to the replay value. The addition of bosses at the end of the levels is great, and does kind of help the game stand out. However, not really being able to do battle with these bosses is a bit of a let-down. Having the penguin have to attack certain spots at a certain time would have been awesome. But there’s still enough here to keep endless gamer fans happy, and playing until they complete the game 100%. It’s definitely another nice FDG release. I can’t wait to see what they publish next.