For those of you into RPG titles, last years release of Squids, developed by The Game Bakers, was a great one. It was a casual action RPG title that definitely stuck with people, and managed to stand out in a genre full of clones, copies, and repetitive release after repetitive release. Since then, fans of the game have been waiting for the epic continuation of the story, and now it’s finally here with the release of Squids Wild West. Steev and his friends are on a quest to find Winnick, and save the underwater world from the evil Black Ooze taking over. And it’s just as memorable an experience as the first. 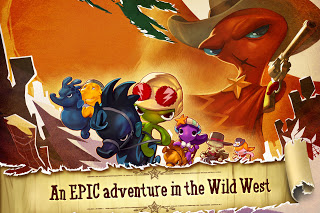 Squids Wild West is just what you’d expect in a sequel. The same great characters, graphics, mechanics, and type of story, merged with new characters, new mechanics, new hazards, and new enemies, and like all fantastic sequels before it, you don’t need to play the previous title to fully enjoy the second. Controls are just like they were in the original Squids, you move your characters by slingshotting them around the level, knocking them into enemies, and getting them in position to use their special powers.
Each squid is one of 4 different types of character; Shooter, which is able to shoot pearls at the enemy, Trooper, who can produce a large shockwave, knocking all enemies around it back and into anything behind them, Scout, who can dash without costing it any movement points, and Healer, which heals characters just by bumping into them. 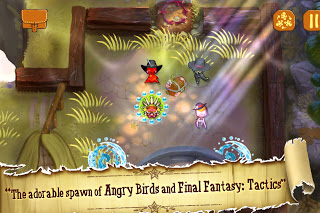 As you progress throughout the game, you’re able to collect many new hats, all of which, you’re able to transfer their powers/stats to the squids who can equip them. This is a huge plus, as it gives you more of a drive to collect and purchase all of the hats you can, because doing so makes each of your characters that much stronger. Hats are unlockable after certain levels, and can also be found in chests throughout the game. It’s a good idea to try and explore each of the levels thoroughly to make sure that each and every item is found. 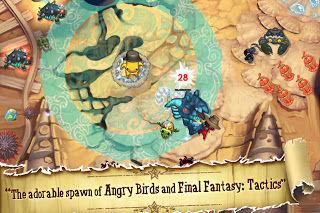 Exploring is also required if you want to try and grab the 3 stars that are available for each level. One for finding the secret star, which is hidden somewhere in the level, one for getting all of your characters through the level without dying, and the last for making it through the level in a certain number of turns. This also adds some replay value to the game, but if you’re willing to play through each level twice, you should be able to snag each of the stars, as well as earn some extra pearls which you can use to upgrade your characters and buy hats in the shop. There are IAPs in the game, but it is in no way pushed towards buying them. You’re able to earn more than enough of the game’s currency, which is pearls, just by playing through each of the games levels once. 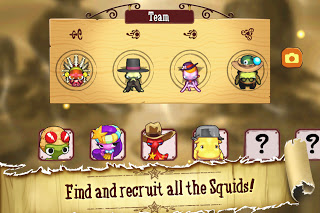 With new mechanics, like warping whirlpools, stables and creatures which you’re able to ride, 12 characters to choose from and make up your team, tons of new levels, new areas, new enemies, and tons of stuff that made the first Squids such a fantastic game to experience, Squids Wild West, being Universal, and priced at $0.99 is a MUST BUY for anyone with an iDevice. It’s a great adventure for hardcore RPG players, as well as casual iOS gamers, and provides hours and hours of great entertainment. Squids Wild West is definitely going to wind up on my top 10 games of the year list.