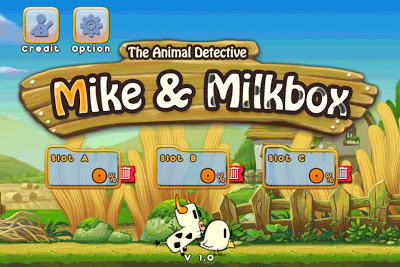 Platformers. Whenever a new one hit’s the AppStore, I get extremely excited. There’s always so much potential and possibility within the genre, even on mobile devices. The most recent one to find a spot on my iPod is Mike & Milkbox, developed by SangWoon Yi. You are a bird spy named Mike who’s been recruited to save the world. Evildoer ‘Melanie’ is trying to design her own world government, and you need to traverse through the 4 worlds/24 stages taking out her minions, collecting coins, and saving little baby chicks. 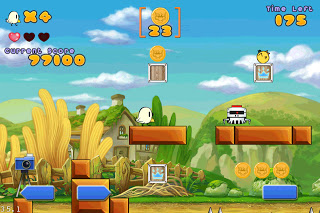 First off, Mike & Milkbox currently only has an iPhone version, which means that playing on the iPad will be in 2X mode, and the controls really aren’t designed for the big screen at the moment. The developer has said that an HD version is coming, so there is hope that they will be customizable on the iPad, and maybe the iPhone version will get some control tweaks in a future update as well. As it is now, the controls work well enough, but the jump button could be a little more responsive. You are able to choose between big buttons and smaller arrows in the pause menu, which is a nice addition, especially since the bigger buttons sometimes block enemies or objects. The dead zone for both control schemes is perfect, but it’s always nice to have buttons which you can place wherever you like, and with so many iOS platformers including that option, it is kind of a bummer when you come across a title that only has fixed buttons. 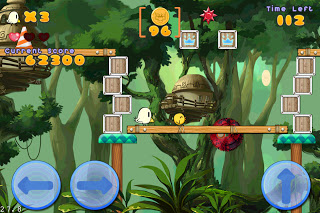 Other important aspects of a platformer? Inertia, physics, and movement speed. Mike does move a little bit slower than what I’d like, but it’s easy to get comfortable with, and isn’t distracting at all. As for inertia, there isn’t any. Once you let up off of a directional button, your character comes to a complete stop, even when in mid-air, which is a huge plus. No need to try and adjust when you let up off of buttons while trying to land on a box, or edge of a platform, and the physics in Mike & Milkbox feel great, making most of the gameplay very comfortable. 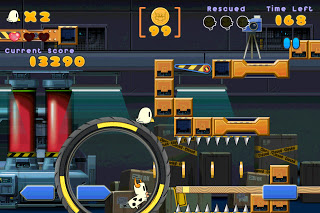 The graphics are great, with beautifully detailed backdrops, retro inspired platforms and wonderfully designed character and enemy sprites. The animations are decent, with enemies falling down into the bottom of the screen when killed, and Mike’s death animation being pretty cute (a bandage, bruises, and ‘x’ed out eyes appear as Mike falls down into the bottom of the screen).
The level designs in Mike & Milkbox are also a highlight of the game. At the beginning, in the Barnyard levels, the stages do seem pretty simple, but as you progress into the Jungle, Lab and Cave environments, the levels become pretty complex, with great warp mechanics, and areas hidden behind fake walls making exploration a part of the gameplay.
Each of the 24 stages has a 3 star ranking, one for completing the level in under 100 seconds, another for collecting each of the 3 little chicks, and the last for taking no damage throughout the level. Since the game does not include any online support, no leaderboards or any achievements, this does help add to the replay value, but only so much. Along with some control options, GameCenter boards and achievements would add a ton to the game. 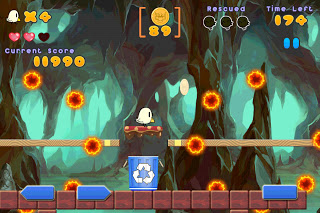 Mike & Milkbox is FREE right now, but is regularly priced at $1.99, so make sure you grab it, and tell all your platform addicted buddies about it. SangWoon Yi has definitely made a platformer that fits very nicely in an iPod folder full of Miss Claire Garden, Wawa Land, Supercow, Kale, and loads more… if you’re a fan of the genre you definitely need to check it out.