AAA developers moving over to iOS development is enough to get any iOS gamer excited. There’s always loads of potential that comes along with the title of ‘AAA Developer’. Unfortunately, more often than not, we’re shown what AAA developers really think of the mobile device when we’re given something that doesn’t really hold up against most indie developed titles. Thankfully, there are those few that really understand what the iOS device can handle, and give mobile gamers an outstanding gameplay experience. 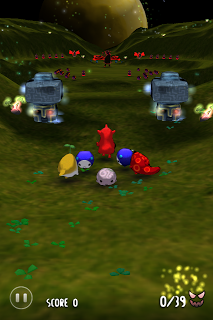 Kotomon, developed by Monstars Inc. is the latest addition to the AAA Developer list, with Osamu Kodera, a 20 year game development veteran who worked at SEGA (and designed the boss encounters in the game Rez. as well as creating Lumines, a critically-acclaimed hit), and moved on to the Xbox 360 PS3 as the technical director of Child of Eden and Sawako Yamamoto who has 10 years of experience, and started at CAPCOM, moved onto Electronic Arts Japan, and oversaw releases of Star Wars and James Bond 007, finally ending up at Q Entertainment guiding multiple projects and helping to produce Child of Eden. In October 2011, Sawako and Osamu founded Monstars Inc, a mobile development project, with Kotomon being their first release. With all of that experience, it’s hard not to expect a lot from Kotomon. Unfortunately, the game falls a bit short of expectations. However, if you go into it not expecting a AAA effort, you might wind up being pleasantly surprised. 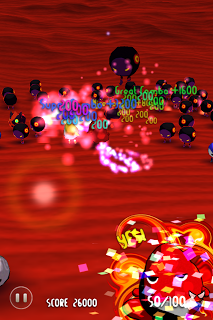 Kotomon has you guide a little red character throughout 24 short levels. There is no story, and no real feeling of progression as you make your way through the game. Joined by other little creatures, you’re able to move using a floating joystick control scheme, and can pick up the creatures simply by walking into them. You’ll need to use these different creatures to destroy the enemies throughout the levels by tapping on the screen once you’re holding one of them, which makes you throw the creature at the enemies. The more enemies you destroy with an enemy, the higher your combo score will be. The main goal of the game is to get 3 star rankings in each of the levels by quickly killing the enemies by grouping them together and getting combo scores.
Each of your little creatures have different attributes, like the little blue guys being quick and able to travel pretty far, they have a light attack, but are able to follow enemies, while the big lumpy white creatures are slow, but a lot stronger. The smaller purplish creature can be flung straight and is very quick, while the red guy shoots fire. Each of the creatures adds to the gameplay, and you’re able to take 5 creatures with you into battle, so figuring out what creatures have a leg up on the enemies within a level will usually allow you to get a higher score, and 3 star rating. 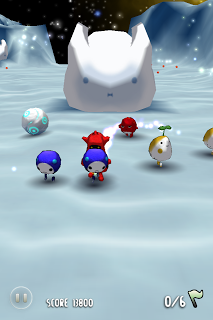 The graphics in Kotomon are fairly interesting. The character and enemy models are great, and it’s clear that tons of work went into creating them. However, the environments are pretty dull, and bring the interesting factor down quite a bit. The same happens to be true of the level designs. Each level is pretty much set up like an elaborate boss arena, which isn’t too surprising considering the background of Osamu Kodera.
Judging by the animations and light shows that the floating orbs within each level show off, the game is supposed to flow alongside music. However, with the arcady action oriented gameplay, this is really thrown into the background. The enemies dance to the music, but other than that, music really doesn’t play a roll in the gameplay, which is sad, because having some sort of attacking system that was intertwined with the scoring system, making the attacks and combos even bigger, and maybe adding more of a lightshow within the animations for the enemies dying (instead of just a little puff of smoke) all based on the beat of the music track for the level would have been a fantastically awesome inclusion. 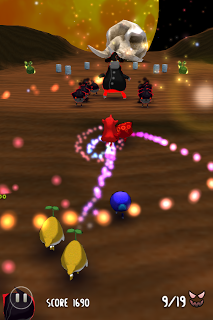 It’s apparent that Monstars Inc. has some very good ideas swirling around, but I was hoping for more with Kotomon. Each level is more like a short type of arena based boss battle in which you need to play a couple times in order to figure out which critters will give you the best score. However, there’s no real drive to do this because of the lack of achievements and leaderboards. A story, and some more depth within the gameplay, attacking, and scoring system would have been great. Also, seeing another mode or two would really help out with replayability. With Kotomon being priced at $3.99, it feels like an expensive demo version of a game that has potential, but hasn’t taken advantage of it yet. Hopefully Monstars Inc. is planning on adding a lot more to Kotomon, because I’d hate to see it just get pushed aside and have yet another AAA Development team figure that no money can be made in the AppStore. It’s definitely a game you should keep your eyes on.