Puzzler games have really been expanding and growing when it comes to new and unique ideas spawned by past games. It’s no secret that Angry Birds (or Boom Blox, depending on how you want to look at it) has, itself, pushed the physics puzzler genre into many different directions, and has had its fair share of clones. But it’s always nice seeing a developer take the flinging mechanic and do something new and interesting with it. Nano Titans, developers of Foodies, an arcade puzzler, has just released their newest title, another arcade puzzler, Webbies. This time around, instead of bouncing your main character around to collect food, you’ll be flinging bundles of food at your characters.
Seems that a grumpy old retired wizard doesn’t like the little woodland creatures hanging out around the forest all the time, and has come up with a formula that makes his arachnoid  friends webs ultra strong. Because of this, the food that the creatures always munch on is getting stuck in the webs. It’s up to you to fling it into their mouths so that they don’t starve. 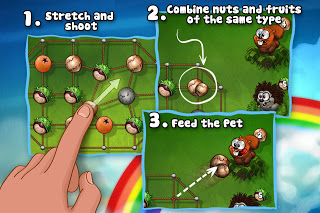 At first, the game seems really easy, and almost boring. But after you get past the intro levels, the game really seems to pick up, and gets some interesting mechanics thrown into the mix. Having more than one critter on the screen will give you different types of food, which are all mixed together in the webs, and you need to get certain types of food into specific animals mouths. This means you need to group the food together, shooting acorns into acorns, moving one piece of food out of the way of another so that you can get it to your critter, or in line with another piece of the same food and then to your critter. This gets ever more difficult as you progress, and moving platforms, sticky grabbers, logs, rotating cannons, moving critters and more all comes into play. 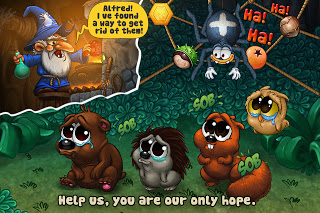 Now, the scoring mechanics are really what push the game forward, and make it more difficult. Getting three stars in each of the levels will require you to combine the same type of food multiple times, getting a combo bonus score. Matching two pieces of the same type of food will give you 5 extra points, while connecting 4 pieces of the same type of food, without connecting a different type of food while in the process, will give you 25 bonus points. If you have two bunches of food, say one bunch of 2 and one bunch of 3, then the smaller bunch is multiplied by 5, and you’re given that many points, in this case, it would be 10 extra bonus points. Once the platforms come into play, bouncing food of them will also give you bonus points. There’s also bonuses for feeding a critter until it’s full, giving you 30 points, and feeding a critter til it’s full in one shot, which gives you 50 points. All of these different types of scoring bonuses will need to be used in order to get 3 stars in each of the levels throughout the game, and to compete on the GameCenter scoreboard.
It’s great how a scoring system like this can really change how you play a game. If there were no bonuses for bouncing food off of platforms, bundling them together, or for other actions throughout the game, Webbies would be played very differently, and you have that option if you’re not into high-scores, which also makes this a great game for the younger iOS gamer audience as well. This is always a great thing to hear for those of us with children who are into gaming. 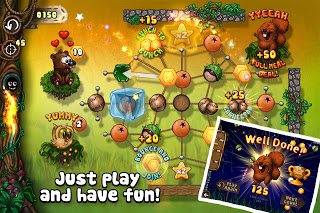 The graphics, animations, sounds and effects, all come together to create a very polished looking and sounding package. With Webbies being Universal, $0.99, and containing over 100 levels, it’s a great buy, especially if you’re into arcade puzzlers, or games with great scoring mechanics and score chasing. There are no extra IAPs in the game, so it’s a flat out purchase. Nano Titans has already submitted their first update to Apple which adds an undo button. I’m a little worried that this might make the game a bit too easy, but I guess we’ll see when it hit’s the AppStore later on in the week. As it is, right now, Webbies is very easy to recommend to fans of the genre, even if you’ve gotten a little sick of the whole flinging puzzler type of gameplay like I have over the last year or so. Webbies might not bypass all of the typical used mechanics within the genre, but the way it’s presented, along with the scoring system adding to the way you’ll wind up playing the game, it really stands out inside of a genre that’s been flooded with titles over the last couple years.