FDG Entertainment is responsible for bringing one of my favorite flash games, Clear Vision, to the iOS. Recently, they also brought Tentacle Wars, another popular flash game to the iPad. This week, they’re doing it again. Expand It, the popular flash game featured on Bored.com has hit the iOS world thanks to one of our favorite publishers, FDG. Expand It falls into the physics puzzler genre, but thankfully, it’s not your typical run of the mill physics title. You need to make your expandable blocks reach a certain height by making them bigger as well as using the interesting objects found throughout the stages. 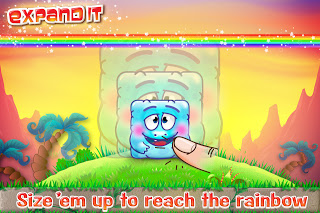 My first glance at the screen shots, I was kind of disappointed, thinking that it was another one of those ‘take out the blocks so that one block hit’s the platform’ type games. Boy was I WAY wrong. Expand It is an original and very unique type of physics puzzler, something the AppStore needs to see more often. To complete each of the levels, you need to tap on certain shapes that are in the levels to make them grow, and to activate various objects and hazards. Once you have the solution, all you need to do is make sure that one of your blocks winds up above the rainbow line towards the top of the screen for a couple of seconds, and voila, on to the next one.
It may sound surprisingly easy, but once you get past the first couple of levels, finding out the solutions could take multiple tries while finding out what each of the blocks and hazards do, and what actually moves within the levels and what size you need to have each of the shapes reach at what given times. After you think you’ve got a handle on the whole layout of the game, it ramps up the difficulty again, always seeming to add something new and unique as you progress. 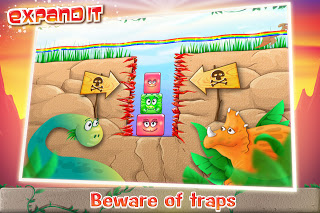 Expand It has 4 different environments, each with 15 stages, offering up 60 separate levels to complete. Each of these levels has a 3 star rating, which can be achieved depending on how quickly you complete the levels. This does add a bit of replay value to the game if you’re interested in competing on the Game Center leaderboard, besting your own scores, or completing each of the 19 achievements. The game also has empty worlds showing that more levels are coming in future updates, which is always great to hear, especially when it comes to physics puzzlers. 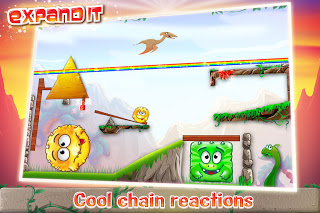 As for the graphics, animations, and physics; Expand It has perfected each of these. The graphics are incredibly cute, well still remaining very polished, and the animations for each of the blocks only adds to the great feeling of the game. Each of the moving objects in a level have been done perfectly, making sure that not one of them throws the flow of the game off. The physics are done to perfection as well, as each object has a certain weight to it, and does a very good job projecting that weight through the gameplay, especially on the stages where you need to have blocks be a certain size at certain times in order to complete the stage. 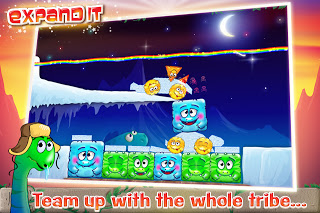 As with other FDG games, Expand It is very reasonably priced, with both the SD and HD versions costing $0.99. A Universal version would be ideal so that people could compete on the same leaderboard, but with the inclusion of HD Retina graphics, I’m actually wishing more and more games would resort to this method of sales, lowering the price for each version making a $2 game $0.99, but keeping the SD and HD versions separate, as all of that extra space for heightened graphics isn’t’ needed on the small screen devices, and usually winds up being seen as a giant waste of space. If you’re a fan of the physics puzzler genre, and are looking for something new and unique, Expand It is definitely a game to check out. And since it’s released by FDG, you know the production qualities, and updates for the game are going to be top-notch, making it very easy to recommend and support.