Every time a new shmup hits the AppStore, I get extremely excited, especially when it’s from a well known developer. Iskandar, developer of Bit-1, Brutal Fantasy, Cut Him Up, and the ever popular shmup, Buster Red, has just released a follow-up to Buster Red called Buster Spirits. This time around, Iskandar has created a shmup more directed towards fans of the genre than another casual shooter. 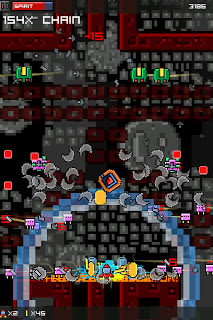 The first thing that stands out about Buster Spirits are the new graphics. Even though they’re retro-inspired, and look old-school, they’re a huge change from Buster Red, which had a more cartoony look to it. But aside from the graphics, like most sequels, Buster Spirits is a lot like it’s predecessor. The game is level based, containing 20 separate stages spread across 4 different worlds, and having 4 huge boss battles. There are also tons of enemies with randomized power-up drops, but in Buster Spirits, the enemies also drop coins, which you’ll need to collect to build up your score. 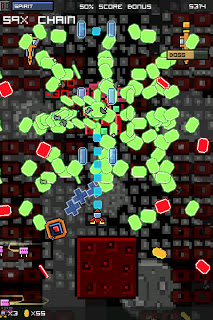 Now, unlike Buster Red, Buster Spirits contains a new scoring mechanic which definitely adds to the hardcore feeling of the game. Grazing. Just mentioning the word gets shmup fans charged up. Buster Spirits gives you bonus firepower for grazing bullets and enemies, which can result in clearing out screens after screens full of enemies in a flash, and adds a ton to the difficulty, as well as the fun, factors. 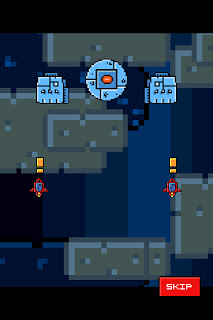 Unfortunately, it’s not all great. There is no main menu, and no options for the game. Considering the controls are more like a Minter game (think Gridrunner) and there’s no option for 1:1 relative touch controls, it’s a pain to get into. Constantly re-adjusting your finger, and under/overcompensating for the extra space your ship will move while trying to dodge huge amounts of bullets of enemies gets very frustrating, very fast. This is kind of a shock, because Buster Red’s controls are fantastic 1:1 relative touch, so it’s strange that this was left out of the sequel.
Also, there’s only one Mode in the game, whereas Buster Red has a Boss Rush Mode, and an Elite Mode. This doesn’t really take away from the replay value, because there’s always a high replay value when it comes to shmups, and GameCenter leaderboards, but it does take away from the feeling of a complete game. Almost every shmup in the AppStore either has Arcade and iPhone Modes, Boss Rush Modes, Practice Modes, or more, and not having this included in Buster Spirits does make it seem kind of incomplete. 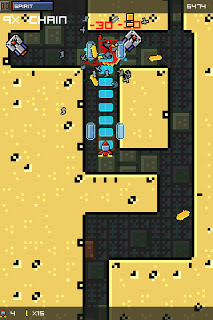 There’s also no difficulty settings, and only one ship to choose from, which, when it comes to shoot-em-ups, is a very big deal. Considering almost all of these things were included in Buster Red, I can’t help but wonder why they were left out of it’s sequel. But priced at $1.99, and being Universal, if you’re a shmup fanatic, it’s hard to pass up another Buster title. Unfortunately, you might not be too pleased with the product. Hopefully Iskandar Inc. adds to the game in future updates, but as it is now, it’s a hard recommendation, even with some great Buster titles under their belt.