GRINSIA
Kemco
It’s pretty rare to see a development team release high quality RPGs one after the other. Square Enix is definitely in that list, but with iOS titles, Kemco is right on their heals. Releasing Symphony of Eternity, Alphadia, Eve of the Genesis and Fantasy Chronicle all within the last year, Kemco has made their mark on the Turn Based RPG scene, and now we can add Grinsia to that list of top notch titles that they’re building up. 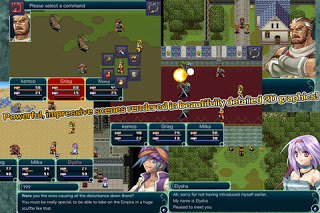 This time around, you’ll start off playing as a 3 member family; Grieg, father, Milka, daughter, and the son, which you’re able to name at the beginning of the game. For those of you who have played Kemco’s other releases, Grinsia might not be as depthy as you might like. The characters HP and MP goes up with each leveling up, which is done with experience gained through battles. You are able to equip your characters with one weapon, one piece of armor, and two accessories. The accessories are all varied from pieces that bring up your defense or attack, to items that can raise the critical hit rate by 10%, or raise a characters speed, luck, or protect against certain magical spells.
Compared to Kemco’s previous releases, Grinsia does not require much, if any at all, grinding, which is a big plus. The game is driven by the story, and, without any side quests, everything that you wind up doing directly effects the progression of the plot. However, in order to progress throughout the game, you will need to do a lot of exploration, and go through a lot of conversation with townsfolk. It’s almost never directly apparent who you’re going to need to talk to, so you will spend quite a bit of time getting to know people in every place that you visit. 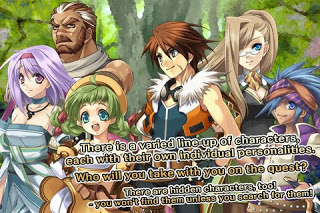 There’s also a day and night system for the game. Some sections will be impossible to pass unless it’s nighttime in the game, while others require the sun to be out. You are also given choices with your character, depending on how you’d like to play, being the ‘good’ guy, or the ‘bad’ guy, each having it’s own strengths and weaknesses, effecting what items you get, and how you make it through certain parts of the game. This sometimes can change the outcome of things, like if a certain character joins your party, but no ‘wrong’ answer will ever get you stuck. This definitely adds a great layer of immersion with the gameplay.
As for combat, like other T-B-RPGs, there is an ‘auto’ button, which makes your characters automatically attack the enemies, without using spells, or items. But this time around, if you decide to use the auto button more than a couple times in a row, you’ll end up killing off your characters pretty quickly. The combat isn’t really challenging compared to some other RPGs, but you will need to pay attention, and mix things up in order to make your way from point A to point B.
To make things a little easier while traveling, each town and ‘dungeon’ area has their own portal. Once activated, you can teleport yourself from one place to another in a flash. This makes moving from place to place, and even across continents a breeze. Another big plus for this mechanic is that you really don’t need to grind through battles, so you can’t really use the teleportation too much, as there’s always enough battles to keep your levels high enough to make it through the game. 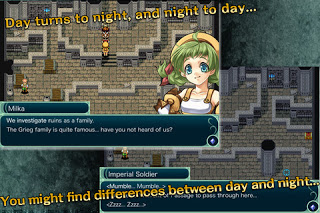 Like all of Kemco’s other releases, Grinsia’s story, translation, and music are all top notch. The story is very well written, while the translation to English is almost perfect, having only minor mistakes here and there. The music is in the same league as old-school Final Fantasy games, adding to the feeling and immersion that the story and characters build up by themselves.
Graphically, Grinsia isn’t really different from Kemco’s previous efforts, with the retro inspired graphics being very polished, and the character models during dialogue looking great. Grinsia has loads of different environments, including port town, inland towns, castles, dungeons, caves, forests, underground hideaways, temples, and more, giving the game quite a bit of variety with it’s environments.
After the release of Fantasy Chronicle, I didn’t think Kemco would ever be able to out-do themselves. However, Grinsia, while not as depthy with the equip or combat systems, is probably the most polished, and well rounded RPG that they’ve ported over to the English AppStore. Right now, it’s on sale for $4.99, and will soon go up to it’s regular price of a well deserved $8.99. Though there’s really nothing negative that can be said about the game as a whole, it is worth pointing out that I, as well as some other players have experienced lag, and frame rate issues, as well as crashes. Kemco has said that they are working on this as fast as they can, so hopefully we’ll get a fix for whatever is causing this as soon as possible. However, out of everyone I’ve talked to, and out of all of the reviews in the US AppStore, combined, only about 10% of players have experienced problems like these, so there’s a very good chance that most of you have nothing to worry about. Now, like all of Kemco’s past RPG releases, Grinsia is ending up as a highly recommended game, and is being put on my personal ‘Best Games of 2012’ list. If you’re a fan of the genre, it’s definitely a game that you should have on your device.
::After posting this review, a user in the US AppStore posted a fix for the lag and framerate issues. If you enable OpenFeint while playing, you shouldn’t experience any lag at all. Apparently, if you’re not signed into OF, the game keeps trying to access your OF data, which is what is causing the lag and slowdown. I’ve checked this on both a 4th Generation iPod Touch, and an iPad 2, both having no slowdown issues at all with OpenFeint enabled.::
**THANKS TO ENDEMION IN THE US APPSTORE FOR POSTING THIS!!**