Silvertree Media’s first iOS release, Cordy, made quite an impression on gamers with it’s fantastic graphics, animations, music and gameplay. However, those who loved Cordy might end up wondering why Silvertree decided to take their second release, Sleepy Jack, in a more casual direction with the gameplay. Sleepy Jack feels more like a Disney’d-up Tunnel Shoot than anything else, having your character go through stages collecting orbs, shooting enemies and objects trying to block your path, and trying to beat level times. Not to say that Sleepy Jack isn’t worth playing, or that if you’ve got plenty of tunnel shooters, that you’re not missing anything if you skip on it, because it does offer up some very top notch gameplay, but those of you who were hoping for something a little more creative based on your experience with Cordy will most likely be disappointed at first. 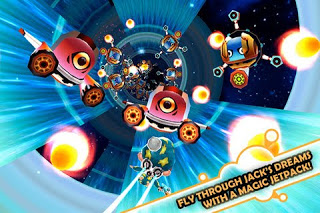 Sleepy Jack puts you inside the dreams of Jack, the kid who owns the toy, Cordy. Each night, you’ll control Jack as he flies through 40 levels, split up across 4 different worlds. Each level has a 3 star ranking system, with one star for completion, one for collecting a certain amount of the level’s orbs, and another for beating the level’s par time. There are 3 different control schemes, one having virtual buttons for movement, using a double tap to make Jack do a barrel roll, one where you can hold on the left or right side of the screen for which direction you want Jack to move, and then swiping in the gameplay area to get him to perform a barrel roll, and tilt controls, which also give you two buttons, one on each side for the direction you would like Jack to do a barrel roll in. While you’re going through the stages, you’ll sometimes be able to fire projectiles. This is done automatically when your fingers are on the screen with the two touch screen controls. For the tilt controls, you’ll need to tap on the screen when you want to shoot. All three control options fit the game very well. In fact, I’m having a hard time finding out which control scheme I prefer, they are all put together that well.
As for the graphics and animations, well, they have that same Cordy look and feel to them, which is not a bad thing by any stretch of the imagination. Silvertree has done an outstanding job with the graphics in Sleepy Jack, giving the whole game a real dreamy look. Each of the 4 different worlds looks very different. In the first world, it looks more like you’re flying through the sky, and space, with clouds, asteroids, and stars all around you, while in the second world, it looks like you’re flying through a huge hole in the ground with dirt everywhere, along with shrubs, bushes, cactus, and huge rocks, and some levels have you flying high above the desert, looking down on everything. There is a lot of detail in the graphics, especially considering it’s a tunnel shooter game, and you’re flying by everything fairly quickly, Silvertree has done an amazing job making everything very polished. In fact, Sleepy Jack is one of the more beautiful games I’ve had the pleasure of playing on my iDevice. In the game’s iTunes description, it says that the graphics are ‘console quality’, though I’m sure most gamers with an XBOX 360 or PS3 would disagree, it would fit very well with other Wii games.
It would be great to see some additional modes added in the future, as tunnel racers are generally known for having more than one mode. Maybe a zen mode, where you didn’t have to worry about any obsticles or enemies, and could just zone out to the amazingly beautiful graphics, or a full on chaos mode where some of the harder enemy battles were thrown at you in waves, and you survived as long as you could with one life. There’s loads of possibilities when it comes to secondary modes in a tunnel racer game. It would also be great to see some unlockable characters, maybe be able to play with Cordy, and other toys that Jack owns. Even though there is a high replay value with the game already, it would just be nice to have some more variety with the gameplay. 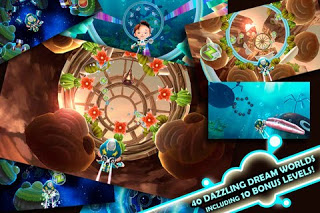 Right now, Sleepy Jack is priced at it’s launch sale price, $0.99, which, even during December, is a fantastic price for this high-quality game. Yes, it is a tunnel racer, yes tunnel racers are not known for their deep gameplay, but once you look past the genre it’s in, and actually start playing it, and progressing through the game, you really start to see how much depth there really is. On top of the 3 star rankings for each level, which provide tons of replay value, there are 3 different difficulties (which also makes the game more accessible to younger gamers, as well as hardcore players), and Game Center + OpenFeint integration. Within GameCenter, there are leaderboards for the first 30 levels, as well as an Overall Score board, and OpenFeint has a board for every level, as well as an Overall Score leaderboard, along with both having 44 achievements. Silvertree Media can add their second title, Sleepy Jack, to that list of top notch, high quality, amazingly beautiful games that they started on with Cordy. I can’t wait to see what they’ll bring us in the future.