Casual games have grown significantly in popularity over the last couple of years. Angry Birds is almost always #1 in the AppStore’s charts, followed by loads of other casual games. Weather you attribute this to heaps of people having iPhones and access to the AppStore when they previously were never really into video games, or that loads of people just want to relax when playing games instead of really getting sucked into something that can take over parts of their lives, you can’t deny that casual games are a huge driving force for the AppStore. Thankfully though, there are loads of developers out there that know that iOS gaming has drawn in tons of hardcore gamers as well, and are doing their best to produce games that appeal to both the casual and hardcore crowds. Foursaken Media happens to be one of these development teams, and their latest release, Mad Chef, is a prime example of a perfect mix between hardcore and casual gaming. 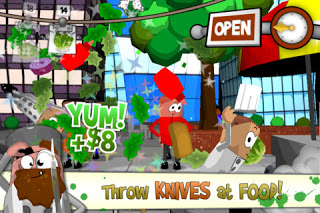 The controls are simple; tap. Yup, tap on pieces of food flying through the air to throw your utensil at them. But it doesn’t stay that simple. You’ll take control of a street-side fast food vender in a big city, trying to feed the masses. As customers walk up to your cart and give you their orders, your sous chef will be tossing up every different kind of ingredient you’ve got in your fridge, and you’ll need to tap on the correct pieces of food that will combine to make your customers orders.
As you progress from day to day, you’ll earn money which can be used to upgrade various different things. Your utensils, you can buy more recipes, send your sous chef to school, buy a bigger fridge, and get power-ups. With each day that goes by, you are rated by reviewers who will add to your reputation, and give you stars. The higher your reputation, the quicker you’ll earn stars, and the more money you’ll make because you’ll be able to help more customers at a time.
Graphics-wise, there is a feeling of the same type of look from Bug Heroes, but the environment and objects are much more vibrant, with tons of color. The gameplay is very smooth, with no slow-down, even during the rush hour stages, where there’s food on pretty much every single little part of the screen (you’re also able to just tap away, as the customers eat whatever you can give them). 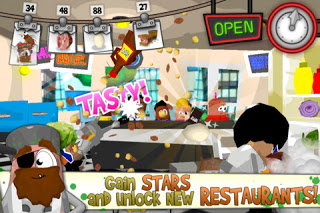 With Mad Chef being Universal, and only $0.99, having GameCenter integration with 8 different leaderboards and 18 achievements, and basically endless replayability. Mad Chef is a game that every gamer should check out. Seeing more game-modes in the future would be a very nice addition, and maybe even some multiplayer, being able to compete against players around the world to see who can make the most money in a set amount of time would really set Mad Chef apart from the pile of casual arcade games in the AppStore, but with Foursaken Media’s extremely great support of their previous games, it’s pretty safe to say that they aren’t finished with Mad Chef. Here’s hoping it grows and truly becomes something special in the future.