Magic Cube’s Infect Them All holds a special spot in my heart. It was released around the time I started loosing faith in casual iOS gaming. More and more developers were diving into the IAP scene, making games that pretty much showed gamers how they were truly viewed as consumers instead of gamers or fans. Then along came Infect Them All from a company I previously hadn’t heard anything about, and I was hooked. 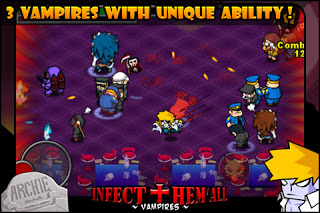 Now, after hours upon hours of gameplay with Infect Them All, Magic Cube’s sequel, Infect Them All: Vampires has just been released. There’s not too much of a difference between the two titles, they both include a Campaign, Infinite Campaign, Survival, and Blitz Modes, they both control the same with either tilt or virtual joystick options, can both have a whole lot of enemies on the screen at once, both have 50 Campaign levels, awesome boss battles, and more. The biggest difference you’ll notice at first is that ITA: Vampires gives your character a special ability. With your first character, you’re able to attack humans by hitting an attack button, causing your vampire to jump and slash twice in the direction you’re tilting or pressing on the joystick. After you attack humans, a reaper will appear above all of them that were in your way, and you can either let them die, or jump on them quickly to infect them, making large groups of humans easy targets.
There are also upgrades, like in the original, but this time around, there’s a few more upgrades that you’ll be able to buy, considering the special abilities that each vampire has. The upgrades this time around are set-up in branches. You’ll need to upgrade certain perks before you can upgrade others, leading to more attacks, stronger attacks, and yes, the typical more health, quicker movement, and so on. But the abilities really do add quite a bit more to the game than you would think, adding more strategy, more action, and quicker, more arcade-like gameplay.
As in the original Infect Them All, you will need to infect a certain amount of humans before Survival and Blitz Modes are unlocked; 5,000 to unlock Survival, and 7,500 for Blitz. It does seem like quite a bit, but after you get through the first couple of levels, infecting 30 humans a stage is not too hard, and much, much more (up to about 75) in the later levels, all of which are re-playable, will unlock the extra modes in no time. The two extra characters are also unlocked based on how many humans you infect. The first character unlocks at 1,000, and the second at 3.000, so you’ll have all 3 characters to play with before you unlock the extra modes, giving you adequate time to upgrade all their skills and abilities before taking on the harder modes. 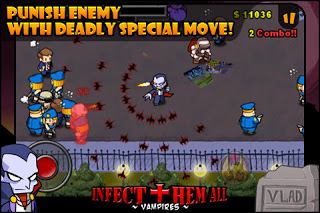 Infect Them All: Vampries is supported by GameCenter and OpenFeint, having leaderboards for each of the game’s modes, and 23 achievements. Considering you can re-play levels, the main boards most gamers will be competing on will be the Survival and Blitz boards. But if you want to play and re-play levels, trying to get into the top 10 or so scores for the Campaign Mode, get ready to sink a good 40 hours into the game. At $0.99, it’s a great buy, especially if you enjoyed the original Infect Them All.